12-Day-Old Rhino Found In Kaziranga Nursed Back To Health 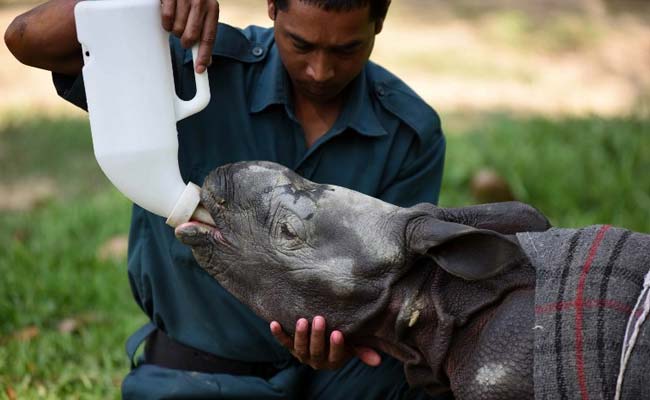 A 12 day-old male rhino calf(R)is fed a bottle of milk by an Indian animal keeper at The Centre for Wildlife Rehabilitation and Conservation facility at Kaziranga National Park in the north-eastern Indian state of Assam. (AFP Photo)

Bokakhat: Wearing a red and grey-striped blanket, a 12-day-old baby rhinoceros is bottle-fed by keepers at a wildlife rehabilitation centre at the Kaziranga National Park, after being found alone in a remote forest region.

Rangers found the rhino calf lying in a stream and abandoned by his mother in the Bagori forest range in Assam.

Dehydrated and in distress, the calf, a greater one-horned rhino, was brought to the nearby Centre for Wildlife Rehabilitation and Conservation (CWRC), which cares for orphaned or displaced wild animals.

Staff have begun hand-raising the rhino, bottle-feeding him milk replacement powder and vitamin supplements and allowing him to interact with other calves to reduce stress.

"When he came he was unable to walk properly, he was very weak and suffering from hypothermia," Dr Panjit Basumatary, a veterinarian at the CWRC, told Agence France Presse.

"Now he is almost back to normal, another week or two of care and we think he should survive," he said.

The baby rhino will be released into the wild when he is about three years old, the vet said, as he will be less vulnerable to being attacked by tigers or other wild animals.

Kaziranga National Park is home to two-thirds of the world's greater one-horned rhinoceros population, according to the park's website, as well as the highest density of tigers in a protected area.

Excessive hunting has left the Indian rhinoceros, which once roamed over wide swaths of the country, now classed as vulnerable, after its habitat was reduced dramatically.

The world's fourth-largest land animal, it can weigh up to 3,000 kilos.

(This story has not been edited by NDTV staff and is auto-generated from a syndicated feed.)
Comments
Centre for Wildlife Rehabilitation and ConservationKaziranga National ParkBaby Rhino Found