To mark the billionth shot the government will make announcements over loudspeakers on trains, planes, and ships, and hoist the tricolour at Delhi's Red Fort

Nine months after the vaccination drive started, India is set to complete 1 billion, or 100 crore, doses. Sources have said this is expected to happen tomorrow - as of this afternoon around 99.4 crore doses had been administered - and the government has planned festivities for a "great achievement".

Sources said party leaders have been asked to visit vaccination centers; party chief JP Nadda will be in Ghaziabad in UP, which votes early next year, for the occasion, while General Secretaries Arun Singh and Dushyant Gautam will be in Tamil Nadu's Coimbatore and Lucknow, respectively.

To mark the billionth shot the government had also planned to make announcements over loudspeakers on trains, planes, and ships, and hoist the national flag at the Red Fort in Delhi.

Only one other country has administered over a billion vaccine doses - China (crossed 1 billion doses in June), which is also the only other country to have a population of more than one billion.

Last month the centre - to celebrate Prime Minister Narendra Modi's 71st birthday - administered over 2.5 crore doses in a day; that was the fourth time over one crore doses were given in a day.

Following that, however, concerns were raised over the actual number of shots given, after some shocking discrepancies emerged from Madhya Pradesh, including jabs being given to dead people.

The administering of one billion vaccine doses - given the unknown and unpredictable nature of the coronavirus, the scale and intensity of the pandemic, and the challenges surrounding manufacturing, distribution, and delivery - represents a significant effort on the part of the government.

However, celebrations around that landmark ought not to hide a possible red flag - the discrepancy between the number of fully vaccinated individuals and those with just one shot.

Only an estimated 20 per cent of the country's 1.4 billion people have received both shots.

By contrast with the busiest festive season of the year upon us, an estimated 51 per cent have been given just one dose so far, which gives an estimated 30 to 50 per cent protection against the virus.

The government has said a "sizeable number of eligible beneficiaries" have not taken their second dose, but it has declined to share the numbers. In Telangana, however, an estimated 25 lakh beneficiaries who had their first dose in June/July have missed the deadline for the second.

The disparity between the partially and fully vaccinated is among the highest in the world, and of concern to a country that has already reported over 450,000, or 4.52 lakh, deaths.

A report by Bloomberg cites health experts' views that pin the lopsided statistic on several factors, including the low number of daily new cases - fewer than 15,000 in the previous 24 hours, the government said this morning - that has reduced the urgency to get vaccinated. 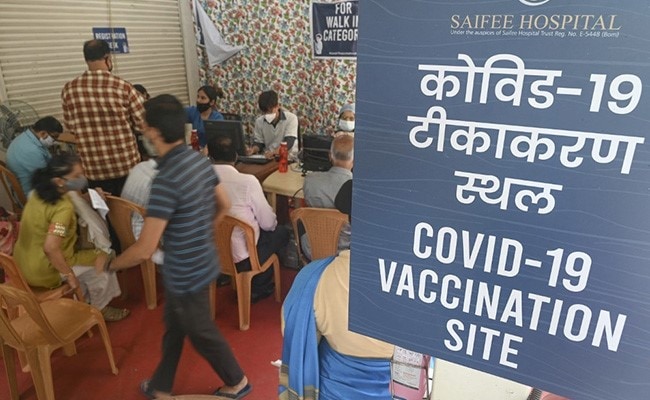 The government is aware of this problem and has called on states and UTs to focus on administering the second doses, and advised them to share strategies to close the gap.

The government has also underlined its readiness to supply additional doses should states/UTs need them, although it has also said they have adequate stocks to meet their targets.

The Serum Institute has said it will provide 22 crore doses of Covishield this month.

With input from Bloomberg

BJP MP "Locked" Inside UP Stadium Over Reward Money, Rescued By Police