Ten Congress legislators, led by Leader of Opposition in the Assembly Chandrakant Kavlekar, joined the ruling BJP, increasing its strength to 27 in the 40-seat house. 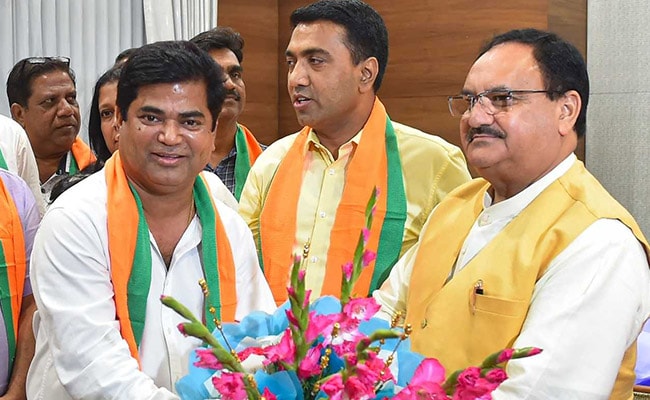 A day after switching to the BJP, a group of 10 rebel Congress legislators from Goa on Thursday officially joined the party at its headquarters in the national capital in presence of its Working President JP Nadda.

Ten Congress legislators, led by Leader of Opposition in the Assembly Chandrakant Kavlekar, joined the ruling BJP, increasing its strength to 27 in the 40-seat house.

Talking to reporters, Mr Sawant, who reached the capital on Wednesday night with the defected Congress legislators, said the declaration on dropping any minister from the coalition partners in Goa would be taken by senior party leaders and that the announcement regarding that would be made after his arrival back to the state.

Mr Sawant also said that the Congress legislators had themselves expressed willingness to join the BJP.

The Congress, which emerged as the single-largest party after the 2017 Assembly polls in the coastal state, is now reduced to five legislators.

The BJP-led state government currently enjoys the support of three legislators of the Goa Forward Party and three Independents. Besides, there are five legislators of the Congress and one each of the NCP and the Maharashtrawadi Gomantak Party in the House.

After the 2017 polls, a hung Assembly emerged, with the Congress winning 17 seats and the BJP 13.

The switchover is expected to have repercussions on the current composition of the BJP-led coalition government in Goa, with the fresh induction of Congress legislators already making coalition alliance partner Goa Forward jittery.

Goa Forward leader and Deputy Chief Minister Vijai Sardesai, who has blown hot and cold against the performance of Mr Sawant as Chief Minister, on Thursday made emotional overtures to the BJP's top and state leadership, pleading that the coalition cobbled together in 2017 under the leadership of then Chief Minister Manohar Parrikar not be tampered with.

"Some people came together to form this government. The central figure (Parrikar) is no longer alive. He knew how the government was formed. Some people, including national leadership of the BJP were also there," Mr Sardesai said, adding that Goa Forward's support had not even "budged an inch" during political turmoil in Goa earlier this year, which followed when Manohar Parrikar was bedridden with cancer.

Mr Sardesai and his two other legislators, all of whom are ministers, face removal from the cabinet. While the three-member strength of Goa Forward was critical to the survival of the coalition in the past, the fresh infusion of Congress MLAs into the BJP makes their support irrelevant.

BJP sources also said that Revenue Minister and Independent legislator Rohan Khaunte could also be dropped from the cabinet along with Art and Culture Minister Govind Gaude, in order to accommodate some Congress rebels into the ministry.

"The final decision will be taken by Amit Shah, after discussing the issue with the Chief Minister and the state BJP president," a source said.

The Congress meanwhile dispatched its Secretary in-charge of Goa A Chellakumar to take stock of the situation. Mr Chellakumar who met the remaining five legislators and state Congress officials said, that the party would file a disqualification petition against the 10 legislators.

Over the last two years, 15 legislators, including 13 of the Congress, have joined the BJP.

However, Wednesday's induction of 10 legislators has triggered outrage in a section of the BJP, especially senior leaders like former Speaker and state President Rajendra Arlekar. "Most party workers are deeply hurt and we will fight out this wrong trend within the party," Mr Arlekar told reporters.

Feuds between BJP party workers have also spilled over on social media over the inclusion of Congress leaders, especially Panaji legislator Monserrate who has been charged with rape, into the BJP.