The hashtag #EkPaiseKiSarkar is among the top trends on Twitter today 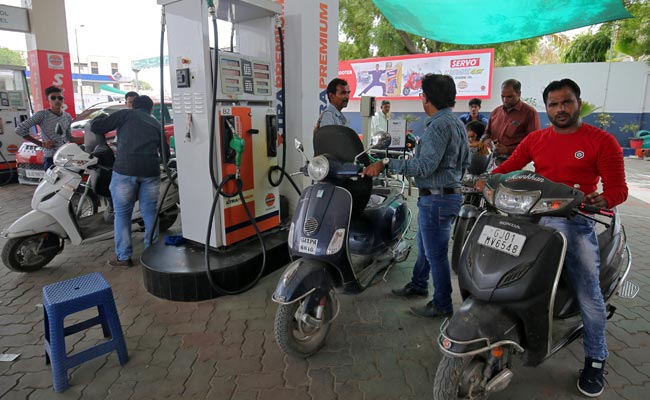 People get their two-wheelers filled with petrol at a fuel station in Ahmedabad, Gujarat (File/Reuters)

New Delhi: With prices of fuel at an all-time high, Indians today woke up to the news that the price of petrol had been slashed by 60 paise while the price of diesel was down by 59 paise. For many, it was a welcome relief after 16 straight days of hikes in petrol and diesel prices. But the happiness was short-lived as the Indian Oil Corporation quickly clarified that the actual price reduction was only one paisa per litre and blamed a "clerical error" for the mixup. The marginal 1 paisa cut fuelled anger on social media. The opposition, led by Congress' Rahul Gandhi, seized the opportunity to target the government over the rising fuel prices and the hashtag #EkPaiseKiSarkar began trending on Twitter.

"ONE paisa!?? If this is your idea of a prank, it's childish and in poor taste," tweeted Congress President Rahul Gandhi.

You've cut the price of Petrol and Diesel today by 1 paisa. ONE paisa!??

If this is your idea of a prank, it's childish and in poor taste.

P.S. A ONE paisa cut is not a suitable response to the #FuelChallenge I threw you last week. https://t.co/u7xzbUUjDS

From its official Twitter handle, the Congress shared a meme mocking BJP supporters:

The price of petrol fell by ONE Paisa. Here is someone ecstatic with the news. What will YOU do with the money you save? pic.twitter.com/HCDxh5yLwD

Breaking: PM Modi to do a victory road show via open jeep for the 1 paisa reduction. #EkPaiseKiSarkar

India woke up to a cruel joke today. We were told that fuel prices are reduced but turns out the reduction in price was just 1 paisa. Which means that to save Re1 out of this reduction, one would have to utilize atleast 100litres of fuel #EkPaiseKiSarkar

The "One Paise" which was phased out of circulation in the early seventies makes a re- entry in the Economy in 2018
The government of the day plays a brutal prank on the people of India by reducing the petrol rates by 0.01 paise
Yes...friends- ONE NAYA PAISA#EkPaiseKiSarkarpic.twitter.com/2fkIkJ0SkE

On Twitter, some responded to the news with humour:

After 16 days of hikes, Petrol and Diesel price cut by 1 paisa.#HumFitTohIndiaFit is already showing results

If you save 1 paise/ltr there's a good chance you might end up saving 3 within just a year!

For that you can get not 1...not 2...but 3 whole @ParleFamily melody chocolates!

Petrol and diesel prices have been steadily rising daily for the last 16 days. The price of petrol has increased by Rs. 3.8 per litre and diesel by Rs. 3.38 over the past fortnight. Prices vary from state to state depending on local sales tax or VAT.

Promoted
Listen to the latest songs, only on JioSaavn.com
Today, there was a cut in the prices after 16 straight days, but just one paisa per litre. "The reduction was supposed to be 1 paisa but due to a clerical error the price prevalent on May 25 was communicated as today's price," news agency Press Trust of India cited a senior official of Indian Oil Corporation as saying.

Kerala, however, became the first state to announce a cut in fuel prices. Chief Minister Pinarayi Vijayan's government has decided it will reduce the prices of petrol and diesel by Re 1 in the state from Friday, June 1. "Re 1" is also among the top trends on Twitter.