Steps are being taken and they include roping in the National Disaster Response Force (NDRF) to safely bring the trapped men up. 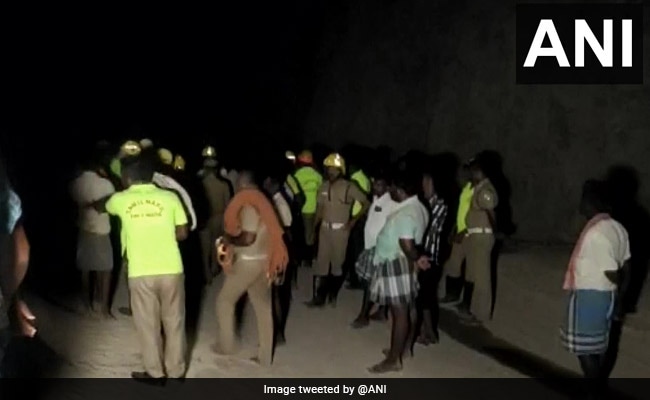 The Fire and Rescue Services officials, along with the locals, are engaged in the rescue

Six workers employed in a stone quarry got trapped in an over 100-foot deep pit after huge boulders came rolling down at Adaimidhippankulam hamlet, near here, with one of the three rescued men succumbing to injuries while efforts continued to safely bring out the other three, officials said on Sunday.

While two rescued men were currently under treatment at the district government hospital, another worker who was safely brought out nearly after 15 hours of rescue operation succumbed to the injury, sources said.

Steps are being taken and they include roping in the National Disaster Response Force (NDRF) to safely bring the trapped men up, he said.

The Fire and Rescue Services officials, along with the locals, are engaged in the rescue of the other workers.

Stalin said action would be taken after an enquiry into the incident and that Rs 1 lakh would be released from the Chief Minister's Public Relief Fund to the injured.

Meanwhile, nearly after 15 hours of rescue operation, another worker was rescued by the personnel and was admitted to the hospital where he died, sources said.

District Collector V Vishnu and Superintendent of Police P Saravanan are monitoring the rescue work. The private stone quarry received the licence in 2018 and it is to be renewed in 2023, Vishnu said.

The services of Navy helicopters were sought, but they were not used due to unfavourable conditions, he said.

A 30-member NDRF team from Arakkonam joined the rescue operations currently under way.