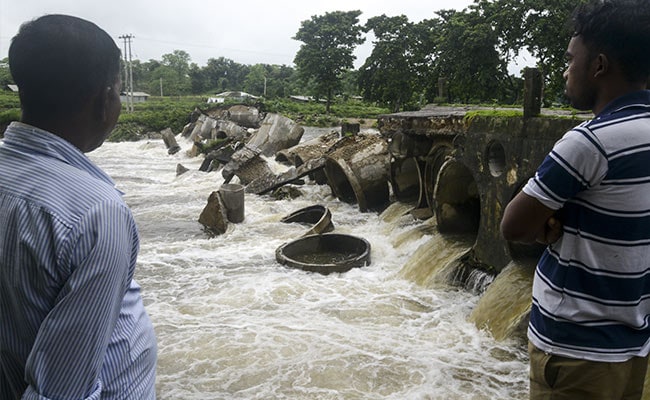 A man died in West Bengal's Jalpaiguri district after he fell into an overflowing drain, a police officer said on Sunday, as incessant rain continued to wreak havoc in the low-lying areas of north Bengal.

Bimal Sil, a man in his early 40s, reportedly slipped into the drain while wading through a flooded street on Saturday night at Shanupara locality of the district, he said.

Sources in the administration said rainfall over the past five days has inundated several parts of the sub-Himalayan districts of Darjeeling, Kalimpong, Jalpaiguri, Coochbehar and Alipurduar.

The Met department has warned of "heavy to very heavy" rainfall in these districts till Monday.

Among other areas, Malda, North Dinajpur and South Dinajpur are also likely to experience heavy rain, the weatherman said.

Overflowing rivers have breached banks at many places, flooding localities and displacing thousands of people, an official said.

Traffic movement on National Highway-10, which was disrupted over the past two days due to landslides, have, however, resumed, following clearing of debris from the thoroughfare, the official said.

In the worst-affected Jalpaiguri and Alipurduar districts, several people have taken shelter in school buildings and some were seen moving to higher ground.

At Moynaguri town of Jalpaiguri district, around 200 families had to move to safer locations after rainwater entered their homes. Angry residents on Sunday blocked National Highway-27 for over five hours, protesting lack of relief materials and shelter provisions in the area.

Jalpaiguri recorded the highest rainfall of 204 mm in 24 hours till Sunday 8 am, the Met department said.

Among the other north Bengal districts, Alipurduar recorded 150 mm rainfall, followed by Coochbehar at 110 mm, Siliguri at 105 mm, Kalimpong 60 mm and Darjeeling at 30 mm.