A suicide note which was found from the scene said that he had never failed in exams and did not want do so, the police said. 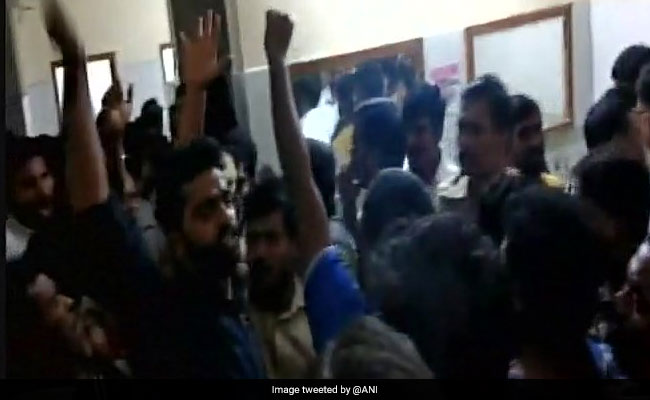 Osmania University students in Hyderabad staged a protest over the incident.

Hyderabad: Protests erupted at the Hyderabad's Osmania University after a 20-year-old student allegedly committed suicide today by hanging himself. Police have been deployed in the campus this morning too.

The body of E Murali, a first-year student of MSc Physics at the university, was found hanging in the washroom of one of the hostels on the campus this evening, a senior police official told news agency PTI.

A suicide note which was found from the scene, purportedly written by Murali, said that he had never failed in exams and did not want do so, the police said.

In the note, Murali repeatedly says sorry to his mother for letting her down.

The student seemed to be in depression and further investigations are currently on, the police added.

After learning about the student's death a large number of students gathered near the hostel demanding action against university officials.

There was a standoff with the media too as the police did not want media to film even as students flung chairs on the police who had surrounded the college hostel building.

Murali's mother Laxmi said she had worked as a daily labourer to educate her son and never expected that the bright future she had dreamt for him would turn into such darkness.

Student leaders blamed the government for pushing students into depression by not acting on the promise of jobs for unemployed youth.

Protesters demanded monetary compensation to Murali's family before his body was moved.

The developments happened on the eve of a major meeting by the Telangana Joint Action Committee today, on the state government failing to fulfill the promise of jobs.
Comments
Osmania UniversityHyderabad