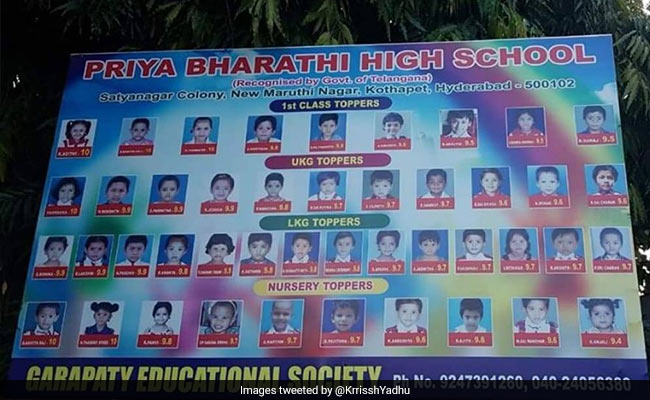 A school in Hyderabad is facing severe criticism on social media after it purportedly installed a hoarding with mugshots of children as young as three years old to show them as class 'toppers'.

In the hoarding that also serves as an advertisement and on which the name of the school - Priya Bharathi High School - is written in big red font, the mugshots of 44 'toppers' from nursery to Class 1 have been pasted from edge to edge.

'Garapaty Educational Society' is written on the bottom of the hoarding. The school in Hyderabad's Kothapet claims it's recognised by the Telangana government.

The practice of pitting very young children against one another in a competitive environment is seen as a bad pedagogical example by educators. Globally, educators prefer to keep a play-as-one-learns environment for nursery classes, where admissions start from a tender age of three.

People on Twitter criticised the school for pushing the children into competition when their cognitive functions are yet to fully develop.

"Ridiculous, let them play and have fun. We urgently need regulatory mechanism for pre-schools in the country," a Twitter user Sunisha said.

"Tells you everything that is wrong about our primary school system," tweeted Dr Mohan Kumar, India's former ambassador to France.

"These schools should be banned. Just imagine the pressure on children who couldn't make it here and their parents who take this as a matter of pride. These are not teachers but killers of childhood," another Twitter user, Dhiraj Singla, said.