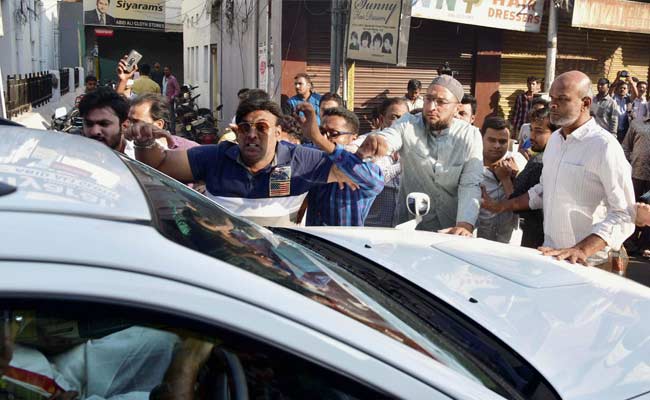 According to the complaint, Mr Khasaf and Mr Shaik were assaulted by the senior Congress leaders and others near Mirchowk police station during the Greater Hyderabad civic polls, the officer said.

Earlier, MIM chief Asaduddin Owaisi, his brother lawmaker Akbaruddin and others were booked for allegedly assaulting Mr Ali and a BJP candidate during the civic body polls.

Mr Ali, Leader of Opposition in Telangana Legislative Council had filed a complaint against Asaduddin and his followers for allegedly attacking him in Mirchowk area and based on the complaint, police arrested four persons namely, Kashaf, Abed and Mohammed Masiuddin, Misbah P yesterday.

Asaduddin is Lok Sabha MP from Hyderabad while his brother is an MLA from Chandrayangutta here.

Mirchowk and Chandrayangutta Police registered cases against the Owaisi brothers and others under IPC Sections 143 (unlawful assembly), 323 (voluntarily causing hurt), 341 (wrongful restraint) and 506 (criminal intimidation), among others.

Mr Reddy and Mr Ali alleged MIM party workers led by Mr Asaduddin attacked them and also damaged a vehicle belonging to Mr Reddy. Mr Ali said he suffered injuries below the right eye and on other body parts.

On February 2, MIM and Congress workers had clashed during the civic polls and police resorted to lathi-charge to disperse them.

The trouble began when Congress candidate Mohammad Gouse and MIM MLA Pasha Quadri got into a heated argument in Mirchowk in the old city, a stronghold of the regional party, following which they were briefly taken into police custody.

Reddy and Ali then reached Mirchowk Police Station, where Gouse was kept in custody. Asaduddin also reached the station at the same time.

According to police, they resorted to mild lathi-charge to disperse the agitated party workers, who led by their respective leaders, gathered outside the station.

Meanwhile, Deputy Commissioner of Police (South Zone) V Satyanarayana said apart from the four arrested in connection with the attack on Ali and other Congress leaders, five more persons have been identified and they were being examined.