IKEA has employed 950 people directly and another 1,500 indirectly at the Hyderabad store 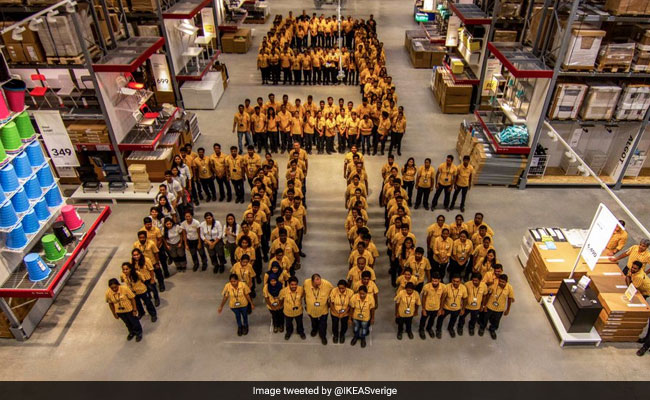 The IKEA store is built on a 13-acre land in Hitec City, on the outskirts of Hyderabad.

Before IKEA opened doors to its Instagrammable Hyderabad store, the Swedish furniture giant's first in the country, there was the traditional staff brekkie at its 1,000-seat cafeteria, among India's largest. The co-worker breakfast is in line with the brand's values, including togetherness and team spirit.

In a few second video shared by IKEA on Twitter, the employees clapped, clicked and welcomed IKEA to India. This was about an hour before the store's formal launch. Soon the doors opened and a sea of fans, curious and prospective shoppers was ushered in by the staff waving the flags of both India and Sweden.

The company, which has employed 950 people directly and another 1,500 indirectly at its store here, plans to hire 15,000 in the coming years as it expands operations in India.

50 minutes before opening the first store in India. The traditional co-worker breakfast #ikeaindiapic.twitter.com/IravgWKZW4

IKEA has revolutionised homeware retail with affordable, DIY furniture (Do It Yourself) with a Scandinavian twist, and its world-famous Swedish meatballs offered at its blue-and-yellow stores.

However, the India store won't have the meatballs on its menu. Pork and beef dishes have also been dropped. Instead, the international brand will woo Indians with what they love the most - biryani and samosas. Hotdogs and dal makhani can also be had here.

Menus are often tweaked to appeal to regional palates. For example, the carte du jour has crayfish in Japan, fish and chips in the UK, and shawarma in Dubai.

IKEA is expecting six million consumers every year to this store in Hitec City, on the outskirts of Hyderabad. The store is built on a 13-acre land. It will sell around 1,000 items, including cutlery and toys for less than Rs 200 here. There will be about 7,500 products including the retailer's signature DIY  furniture.

Welcoming the first customers in the first IKEA store in Hyderabad. #ikeaindiapic.twitter.com/lfMMCintkF

Iffy about its DIY model in India, UrbanClap, that offers urban lifestyle services, has been roped to help assemble furniture.

After Hyderabad, IKEA arrives in Mumbai next year, followed by Bangalore and New Delhi.

First phase of Hyderabad Metro to be completed in three years