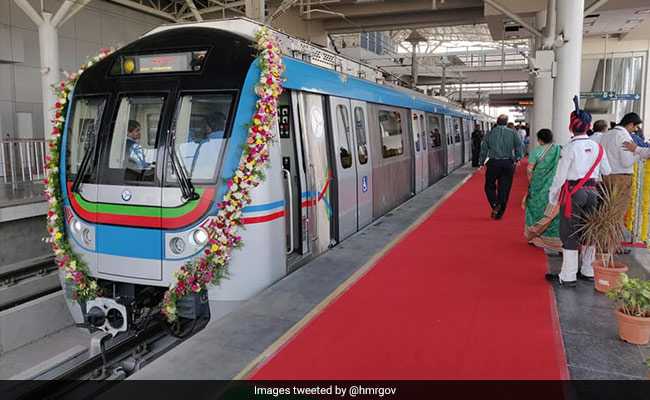 Governor of Andhra Pradesh and Telangana ESL Narasimhan flagged off the metro rail services to Hi-Tec City, the IT hub of Hyderabad,at Ameerpet Metro station.

Prime Minister Narendra Modi had inaugurated the 30 km stretch between Miyapur and Nagole in November 2017.

Another 16-km stretch of Hyderabad Metro Rail between Ameerpet and L B Nagar was launched in September 2018.

Currently around 1.8 lakh passengers travel by Metro services on these operational routes daily.

The Governor later travelled from in the Metro train from Ameerpet.

The Ameerpet-Hi-Tec City stretch, which forms part of Corridor-III (Nagole-Hitec City-27 km), is one of the most congested traffic corridors of Hyderabad, the officials said, adding this stretch connects with already commissioned stretch of Nagole-Ameerpet (17 km).

The total Corridor-III of 27 km has now been made available for the public to give good integrated connectivity to Hi-tec City from different parts of Hyderabad.

Among the nine stations (Ameerpet-Hi-Tec City stretch), Taruni-Madhura Nagar station is being developed as a women managed station and in due course would have shops mostly catering to their needs and that of children.

HMRL Managing Director NVS Reddy said the Jubilee Hills checkpost station was a single level one unlike other stations which are mainly on two levels.

The concourse level was avoided to reduce the already high level of the station due to gradient related problems,he said.

The officials further said that Corridor-II from JBS to MGBS (10 km) will be completed by December this year.

At an average speed of 32 kmph initially (max speed 80), the Metro train covers Corridor-I and Corridor-III (Miyapur - LB Nagar and Nagole - Hitec City) in 50 minutes as against two hours by road.

Initially trains will run with a frequency of about 12 minutes, which will be increased to three minutes gradually, the officials said.

After completion and stabilisation, the system is expected to carry 15 lakh passengers per day.