Many IBS patients notice that stress worsens their symptoms. That suggests to some that practices that reduce stress can be therapeutic, such as mindfulness techniques. 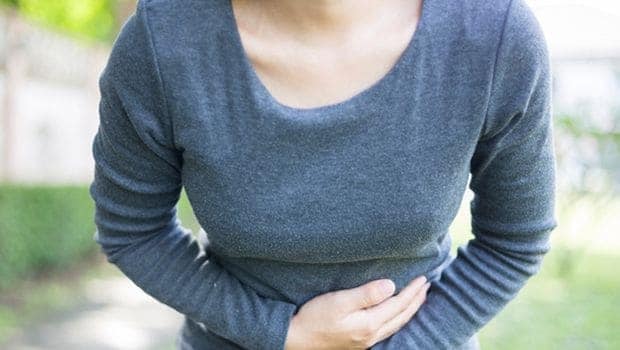 Many IBS patients notice that stress worsens their symptoms

About 10 to 15 percent of the U.S. adult population has symptoms consistent with IBS. The American College of Gastroenterology says it's the most common diagnosis made by its member physicians.

Most people who have been diagnosed have had a battery of tests to rule out other related conditions, such as celiac disease and Crohn's disease. That may lead to a misunderstanding that IBS is a catchall category for people whose digestive troubles cannot be pinned to a known disease.

Doctors say that IBS is diagnosed based on symptoms, not just lack of other diagnoses, even though the fundamental causes of IBS are not known.

"It's not a definitive disease. It's a collection of symptoms," says Eamonn Quigley, a gastroenterologist at Houston Methodist Hospital. "IBS probably encompasses a number of entities."

Even the course of the disease varies widely.

For instance, some people experience a relatively sudden onset that often coincides with an intestinal infection or a bout of stomach flu. "IBS is well documented after big outbreaks of gastroenteritis," Quigley says.

Other people will describe themselves as always having had digestive issues, such as childhood bellyaches or food intolerances.

IBS can be managed with attention to lifestyle habits, use of over-the-counter remedies and prescription medications.

Drugstore products - such as Imodium, an anti-diarrheal, and Dulcolax, a laxative - can help, depending on the bowel movement type. And your doctor may recommend a fiber supplement or a probiotic pill filled with "good" bacteria. (Probiotics are not well-regulated and many doctors have preferred brands.)

Prescription fixes include antispasmodics such as Bentyl and Levsin, which relax the intestinal muscles to relieve cramping.

Dietary changes, in particular, can reduce symptoms. The low-FODMAP diet is an evidence-based approach. Studies have found it leads to improvement in 7 out of 10 people with IBS.

FODMAP is an acronym for fermentable oligosaccharides, disaccharide, monosaccharide and polyols, all of which are carbohydrates. High FODMAP foods include known gas-producers such as beans and cauliflower, known problematic-for-some-people foods such as wheat and dairy, and a whole host of other potential offenders such as onions, apples, mushrooms and honey.

"It's a collection of foods that are commonly malabsorbed," says Kate Scarlata, a registered dietitian in Boston and author of "The Low-FODMAP Diet Step by Step."

In people with IBS, consuming these foods can cause major flare-ups. That's because gut bacteria feed on the malabsorbed foods and produce excess gas.

"When anyone eats chili, they have gas. But most people go to work the next day," Scarlata says. "People with IBS are more sensitive. The gas gets trapped, there's cramping and they're out of work for two days."

But not everyone with IBS is sensitive to all high-FODMAP foods. Onions and garlic might be the culprit for some people, but not others.

The idea behind diet-as-therapy for IBS is to remove all of these high-FODMAP foods from your diet for up to six weeks, rather than taking a piecemeal approach, avoiding only those foods you might think are triggers. If your symptoms improve, then you methodically add back the various FODMAP categories one at a time, to see which ones you can tolerate.

So the diet is not forever. It's more like detective work to see which FODMAPS trigger IBS symptoms.

Scarlata recommends people work with a professional dietitian. They can help you find substitutes for your usual meals and snacks and they can identify hidden FODMAPs, such as the common additive called inulin or chicory root.

"Honestly, it's the difference between a diet that feels too restrictive and a pleasant experience," she says.

Many IBS patients notice that stress worsens their symptoms. That suggests to some that practices that reduce stress can be therapeutic, such as mindfulness techniques.

It's also evidence for some crosstalk between the brain and the gut, Quigley says.

IBS patients may have a disturbance of the bacteria in their gastrointestinal tract. They may have low-grade inflammation in the walls of their intestines. They may also have symptoms of anxiety and depression, which are housed in the brain. And the autonomic nervous system (which regulates gut function automatically) is a conduit for increasing or decreasing messages among the players.

Upset in any of these places gets relayed throughout the gut-brain axis and can lead to a syndrome such as IBS.

"These are disorders of the gut-brain axis," Quigley says. It's a view that is fueling current research on IBS and that should help health-care providers better understand the complexity of the syndrome.

Quigley bemoans the too-common failure of doctors to grasp the impact that IBS has on people's lives. A major advance in thinking, he says, is that the medical profession is now taking IBS more seriously.