Last week, Mumbai Police campaign to curb the alarming rise in the noise pollution levels in the country's commercial capital was widely shared on social media. 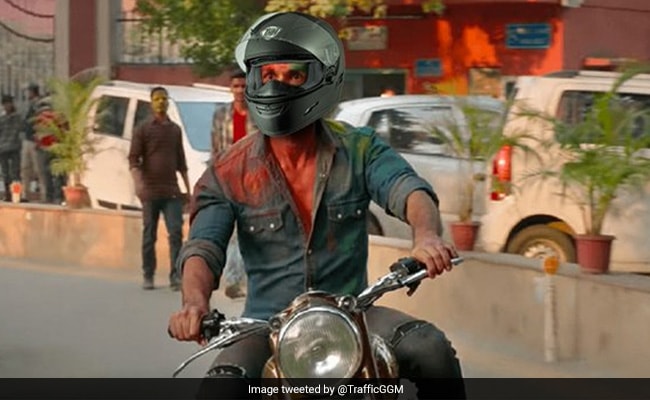 The Gurugram Police edited a helmet onto Shahid Kapoor's head while sharing its message.

The Gurgaon Police seems to be catching up with its Mumbai counterparts in peppering humour to tweets to grab maximum attention on social media.

The Gurugram Police has come up with a still from Shahid Kapoor starrer "Kabir Singh" to educate people about the importance of wearing helmets while riding a two-wheeler. "Jab khud bachoge tabhi Preeti ko bacha paoge (You can protect Preeti only when you save yourself,)" reads the tweet showing Shahid Kapoor riding a motorbike with a helmet. Preeti is Shahid Kapoor's character's love interest in the movie Kabir Singh.

The grab was taken from the scene in which Shahid Kapoor is seen riding a motorbike without a helmet as he sets off to avenge the misbehaviour shown to her. The Gurugram Police edited a helmet onto Shahid's head and wrote on the picture, "Always wear a helmet while driving."

The tweet has received a flood of reactions from social media users with 3.1k retweets and over 13.3k likes since it was shared.

Another user asked police to ask movie makers to make actors use helmets in their films.

@PuneCityPolice@MumbaiPolice Request U 2 Recommend All Hindi Filmmakers to Make All superstar Actors to Use #Helmets in The Films. All Actors Needs to Wear Helmet & become Trendsetters for the Youths

The decibel monitors were connected to traffic signals, and when the cacophony due to needless honking exceeds the dangerous 85-decibels level, the signal timer resets, entailing double waiting time for all vehicles.

This is not the first time that the Mumbai Police had come up with unique campaigns to deal with day to day struggles of the common man.

Recently they came up with a social media campaign #DontAppAndDrive to ask the people not to use their mobile phones while driving.

They changed the name of some famous Apps. For instance, ''WhatsApp'' was changed to ''WreckApp'' while ''Instagram'' was referred to as ''Risktagram''.