The snake is seen curled up around an activist's hand, as he holds the python by its neck. The activist untangles the snake as someone holds a bag open 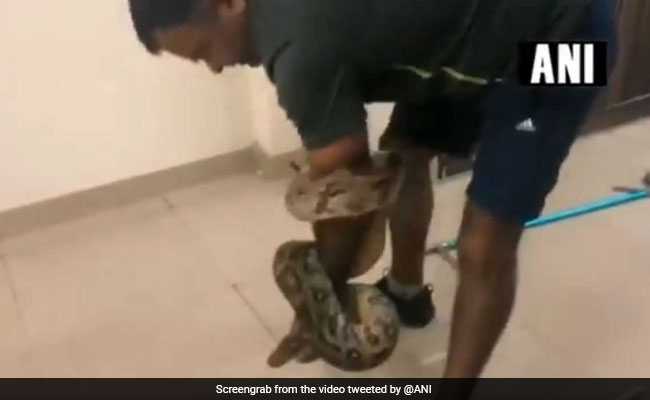 The python, weighing over 10 kg, was found at the Gurgaon house late on Sunday night

An Indian rock python, more than 10 feet long and weighing over 10 kg, was found on a third floor flat in Gurgaon's posh DLF 5 area. A video shows a wildlife activist catching the snake and putting it into a bag.

The snake is seen curled up around an activist's hand, as he holds the python by its neck. The activist untangles the snake as someone holds a bag open. The activist manage to release the snake into the bag and close it.

The python was spotted late on Sunday night at the apartment's kitchen, where it hid itself. "It might have used the stairs or a tree near the balcony of the flat," Anil Gandass, the activist who rescued the snake, told news agency IANS.

Mr Gandass that the snake would be released in the Aravali forest, along with some other snakes found in different parts of Gurgaon over the last month.

Mr Gandass said more than 250 snakes of different species were rescued in the last three months from Gurgaon.  "The good thing is that instead of killing these creatures, people now inform us so that the reptiles can be rescued. People are getting more conscious," he said.

A python like this one was also rescued from an apartment kitchen in the nearby Sheetla Colony, he said. "It could not be established how the creature managed to reach the slab of the kitchen," the activist added.