How Police Is Ensuring Stranded Migrants Have Memorable Stay In Goa

Nearly 68,000 migrants have been sent back to their restective states, while 30,000 are still stranded in the coastal state. 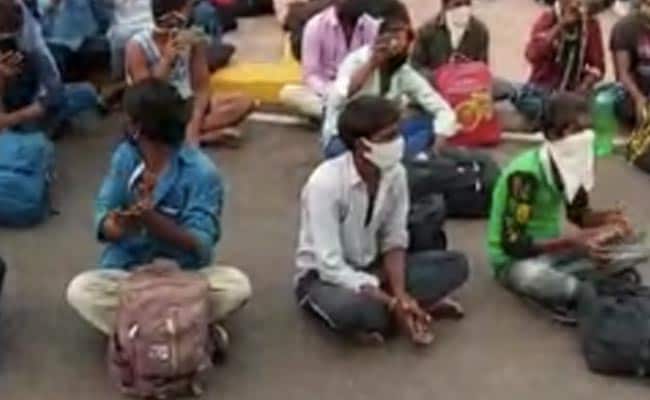 A group of migrant workers -- all wearing masks -- are seen sitting on the road, clapping in excitement as a Hindi song is being sung by a policewoman in Goa. The video from Navelim Stadium, Margao South District shows how the Goa police is keeping the migrants entertained as they wait for journey back home.

Nearly 68,000 migrants have been sent back to their restective states, while 30,000 are still stranded in the coastal state. The police, however, has ensured that the migrant workers have a memorable stay in the state.

#Goa is all about music and hospitality! How can it's police be any different. See how police officials entertain migrant workers. So far 68000 migrants have managed to leave state but about 30000 still are in state! #MigrantWorkers@DGP_Goapic.twitter.com/Tom4o8DePt

The first Shramik Special train left Goa for Madhya Pradesh''s Gwalior with 1,200 migrants on May 8. Since then, nearly 70,000 migrants have been sent to their respective states.

On Sunday, Goa released a revised SOP for all domestic passengers arriving by air, rail, or road to the state as domestic flight services resumed on Monday.

While Maharashtra has reported over 52,000 positive cases, Goa has registered 68 cases so far .

"The situation of Covid-19 is under control. No local has been detected positive for Covid. Those who came by trains or other states, we quarantined them at the border and then tested them for Covid and admitted them to the hospitals after they were detected positive for the virus," Goa cheief minister Pramod Sawant said.

He also mentioned that there is "no community transmission" in Goa and it falls under "safe and green zone".