This comes just a day after a similar incident with a media person, whose gold chain was also snatched in Ghaziabad's Shalimar Garden area. 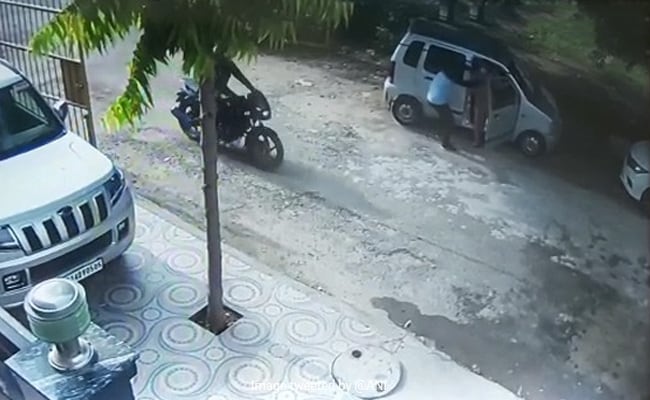 Ghaziabad: The woman tried chasing them but they fled the spot

Two bike-borne men snatched a gold chain from a woman on Saturday in Ghaziabad's Avantika area. A CCTV camera installed in the area captured the incident.

The 20-second clip shows the two men arriving on a motorbike. The woman was sitting inside her car, parked on the left side of the road. The rider slowed down the bike near the car, allowing the pillion to disembark. As the woman stepped out of the car, the pillion rider snatched the gold chain she was wearing.

When the woman resisted, the chain fell on the road, which the man picked up before escaping.

Since the incident occurred as early as 8 am, there was nobody around to help the woman. Later, another man appeared in the video, who perhaps wanted to help but could do little as the men had already fled. The police have registered a complaint.

This comes a day after a media person's gold chain was snatched in the city.

The Uttar Pradesh government is planning to frame stricter laws to curb such crimes. According to a report in The Pioneer, the state law commission has submitted a report to the Yogi Adityanath-led government recommending a jail term of up to 14 years for chain-snatchers.

The panel has recommended that the word “snatching” be added to theft in Section 410 of the Indian Penal Code (IPC).