After BJP MLA, UP Official Fight In Office, An FIR And A Letter To Yogi Adityanath 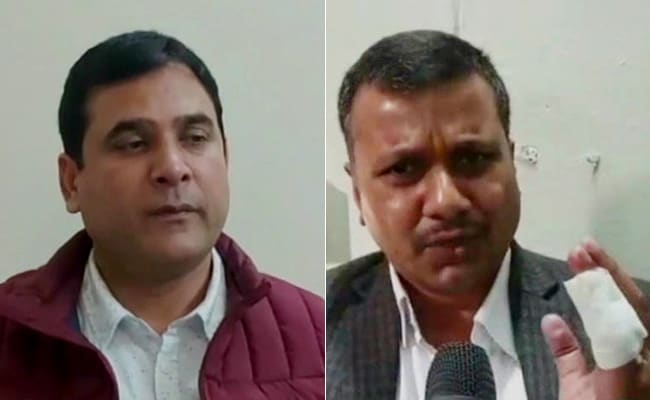 An altercation between BJP MLA Nand Kishor and an official lead to a fight. Both want an investigation

BJP MLA Nand Kishor Gurjar on Friday wrote to UP Chief Minister Yogi Adityanath claiming that officials and the mafia are conspiring to malign him and murder him.

In his letter to the Chief Minister, he urged Yogi Adityanath to send him to jail so that he can be "safe". His constituency, Loni, is a town in Uttar Pradesh's Ghaziabad.

"If I am out, I have taken a pledge to fight the corrupt and those who bend the rules. Under no circumstance will I let them cheat the people of my constituency," he told news agency ANI, adding that there has been a threat to his life in the past, which he has written about to the Chief Minister and the Director General of Police. He claimed that "On two occasions in recent times, those who tried to kill me were caught. It is by god's grace that I am still alive despite two attacks on me."

He further claimed that he has handed over "evidence" based on which action was taken against some officials, following which they approached him in his office and threatened him. "This forced me to warn them using the Chief Minister's name," he said.

"Before leaving they threatened me, saying we can fix you in two hours", Mr Kishor alleged.

"The way in which officials are functioning in Loni is a matter that needs to be investigated thoroughly," he asserted.

"These corrupt officials work by misusing the Chief Minister's name. I told them not to do so as it is shows the Chief Minister in bad light. You must work within your own capacity," he claimed, further alleging them of "working with the mafia".

"In my letter I have requested that cases be lodged against me under such sections that I remain in jail for life, so that these corrupt leaders and officials are not able to loot my constituency Loni and its people. My being in jail would foil their conspiracy to kill me and I can be safe," he said.

"The district president of my own party, who collected crores of rupees as 'Sangathan Mantri' during the Municipal Corporation elections, whose video went viral and the news of which was published in newspapers, against whom corruption investigations were launched after a letter was written by VK Singh, which the Lokayukta found credible... those people are now trying to send me to jail by aligning with corrupt officials and tarnishing mine as well as the government's image," he alleged said.

Countering the MLAs charges, an official who was part of the altercation, said "The entire issue is based on a hotel that the MLA wants shut, even if it means using unfair means."

"I have just completed two months here in Loni. On November 27 I got a call saying that the MLA wants to meet me. So I went to his office to meet him. When I spoke with the MLA, he asked me what is the matter, why are you not closing down Salaam hotel. To which I said that the hotel is functioning as per norms and is following all the rules laid down by the government," he said.

"To this he replied, saying Mr Inspector, you are here for two months now. I told you to do one thing, can you not do it just because I say so? I told him that this is not how things happen. I cannot shut down a place as a personal favour to someone. I cannot go against the rules and shut down a place which is working legitimately. I will not be able to do it because once the matter goes to court, it will be me who will be answerable on what grounds I have taken action," he added.

"After this he asked others in his office to leave, and when we were alone, he demanded I shut down the place anyhow. When I refused, saying I might lose my job because of it, the MLA lost his cool and started hitting me. He called in the other people in his office and they all assaulted me," he alleged.

Pointing to his finger in a plaster, he said "Look, I even have a fracture. They broke my fingers." 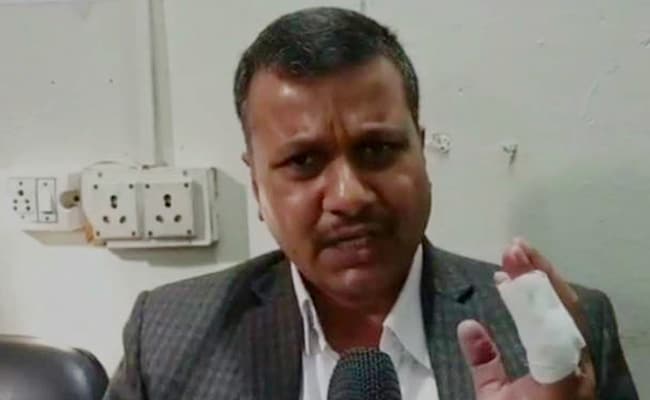 The UP official alleged that BJP MLA Nand Kishor Gurjar and others in his office beat him up, broke his fingers.

The matter is now in court, but an FIR has also been filed against the BJP MLA.

"Now they are cooking up stories and lying about what I said and did," the official alleged, admitting that "When I was asked where I come from, I did say I am from Gorakhpur. But if others take this as a threat from me, it is not my fault."

Gorakhpur is the hometown of Chief Minister Yogi Adityanath.

"If this is how things happen here in Loni, not just me, it will be extremely difficult for any official to work as per the rules," he said.