Dwayne 'The Rock' Johnson recently made headlines for recording double income since last year. Here's a tribute to the actor and former wrestler's King-sized cheat meals! 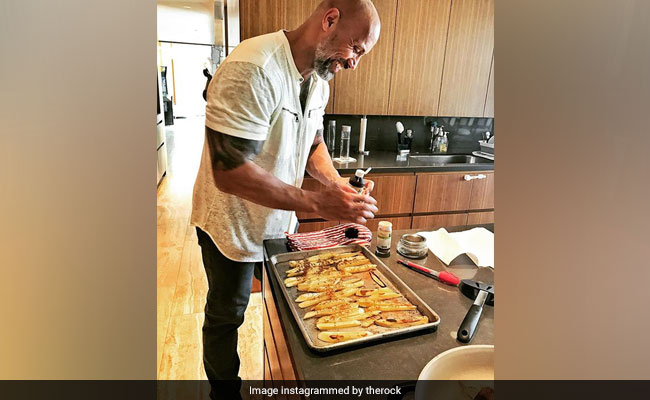 Unless you've been living under 'a rock' since the past two decades or so, you might be familiar with Dwayne 'The Rock' Johnson- former professional wrestler, actor and producer. The Rock's towering personality and amazing acting chops have made him a familiar face across the globe. The Hollywood actor recently made it to Forbes' list of highest paid actors as well, and has reportedly doubled his net worth since last year. Aside from his impeccable comic timing and congenial nature, The Rock is known for his disciplined and tight routine. The man has earned his place in the world and his fame is no mere coincidence- he has put sweat, blood and tears into it. The uber brawny Dwayne Johnson is known to follow the mantra 'Work hard, play hard' and is also famous for one of the most extreme diet and workout regimes you're ever likely to come across for a celebrity.

Dwayne Johnson's diet is legendary, as it's supposed to be, given that the actor has maintained the impossibly huge muscle mass that he flaunts in his films. The actor has revealed to a popular fitness magazine that he eats a total of seven daily meals, which include 36 ounces (approx. 1 Kg) cod fish, six cups of white rice, four cups of vegetables and two salads and a dozen eggs in one day! Needless to say, that none of us mortals can ever dream of eating like Johnson, as we obviously don't work out the way he does. However, it's not just his diet and workout that is super intense and extreme- even his cheat meals are king-sized and we have proof!

Dwayne Johnson often posts pictures of his cheat meals during the weekends on his Instagram page and we're just blown away, looking at the amount of food in every single cheat meal. The Rock sure knows how to treat himself and satiate his gluttony. A regular feature of his cheat meals is banana, chocolate chip pancakes, slathered with peanut butter and topped with Canadian maple syrup. Have a look:

Another one of his cheat meal favourites is sushi, which you'll often see him indulging in, on Sunday night. He might just go a little overboard with the portion, but you've got to cheat properly when you do, am I right?

The Rock is always encouraging his followers to make their cheat meals large, just like this sushi binge that he indulged in. Just another weekend at the Johnson household:

Here's another humongous cheat meal that Johnson indulged in. In case you were wondering, yes those are indeed monster fudge chocolate brownies you're seeing here.

Explaining his cheat meal philosophy, the Rock says in this Instagram post, "I make my cheat meals EPIC because, hell we all work hard and only live once." Now that's something we can easily get on board with. Seen in the picture above are "Huge turkey subs - oven roasted turkey, provolone cheese, lettuce, tomato, onion and mayo on the side. Huge fudge brownies with milk chocolate chips, natural peanut butter and fudge smothered and drizzled on top." If this isn't incredibly inspiring, we don't know what is. Now we know what exactly fuels The Rock's incredibly energy and zest for life!