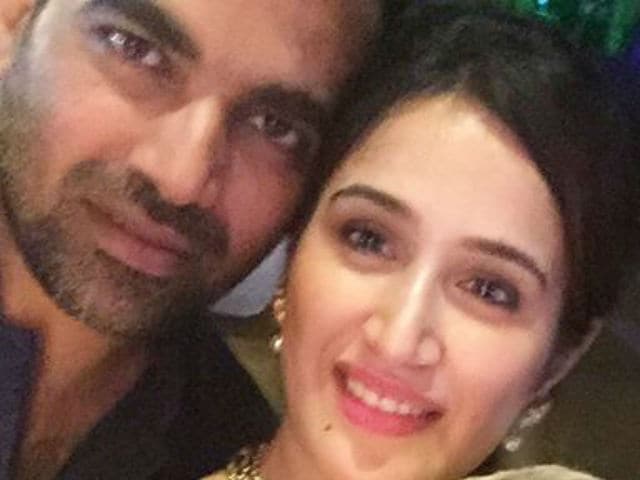 New Delhi: Cricketer Yuvraj Singh and model-turned actress Hazel Keech's wedding has been the talk of the town for quite some time now. Amidst this, a new relationship seems to be budding between cricketer Zaheer Khan and actress Sagarika Ghatge. Both of them are trending after they were spotted attended Yuvraj and Hazel's wedding ceremony in Goa together. The Internet thinks they could be a couple after after many pictures of Sagarika and Zaheer posing with the guests at the wedding made rounds on social media. It is the first time that Zaheer and Sagarika have been spotted together. The Chak De! India actress has also shared many pictures from Yuvraj and Hazel's wedding, where she is seen posing with Zaheer.

Cricketer Rohit Sharma, who attended the wedding with his wife Ritika Sajdeh, also dropped a major hint about Zaheer Khan's possible relationship status in a picture that he captioned, "Brotherman down! Best wishes to my older brother @YUVSTRONG12 ! All eyes on @ImZaheer now".

Brotherman down! Best wishes to my older brother @YUVSTRONG12 ! All eyes on @ImZaheer now pic.twitter.com/kYYyqSSCMc

Zaheer Khan, 38, was earlier rumoured to be dating actress Isha Sharvani, a relationship that neither acknowledged. After playing the role of Preeti Sabarwal in the 2007 blockbuster Chak De! India, for which she received the Screen Award for Best Supporting Actress, 30-year-old Sagarika Ghatge was seen in films like Fox and Miley Naa Miley Hum.

Me and sagu! Superrrr funnn night! Goa! #shaadi #yuvihazel /a>

Promoted
Listen to the latest songs, only on JioSaavn.com
Cricket and Bollywood have romanced each other ever since Mansoor Ali Khan Pataudi and Sharmila Tagore married in 1969. Mohammad Azharuddin and Sangeeta Bijlani, Harbhajan Singh and Geeta Basra and now Yuvraj Singh and Hazel Keech have continued the tradition.

Hazel Keech and Yuvraj Singh's wedding celebrations have been mammoth. Festivities began last week in Chandigarh where they had a mehendi and a sangeet, followed by a gurudwara wedding. The party then moved to Goa where guests also included Virat Kohli and Anushka Sharma. A second wedding, according to Hindu rites, was held in Goa. The scene has now shifted to New Delhi, where a sangeet has already taken place. A grand reception is planned for December 7.