When Tiger Shroff 'Doesn't Feel Like Working,' He Is Busy 'Chilling.' This Video Is Proof

"You are really A Flying Jatt," a fan commented on Tiger Shroff's video 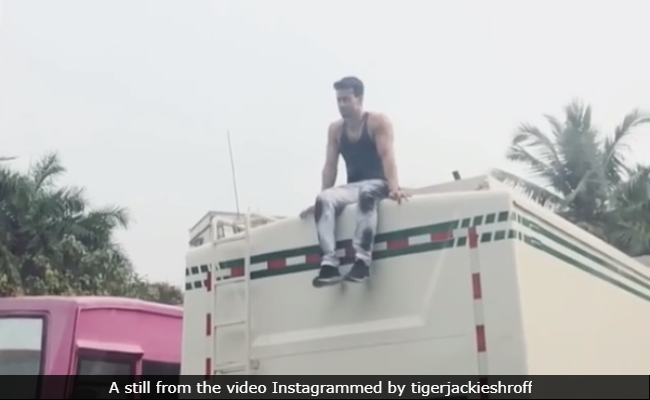 Tiger Shroff is redefining the word "chilling" and how. Tiger channeled his inner 'Flying Jatt' and decided to put his "powers to good use." In case you are still wondering what we are talking about, we must tell you that we are referring to the Tiger Shroff's latest Instagram video, in which Tiger can be seen showcasing some great parkour moves. The 28-year-old actor captioned the post: "Hmmm! don't feel like going to work today... So I think I'll just chill here." He accompanied the post along with hashtags like "#powerstogooduse" and #flightmodeon." The video received over 5 lakh likes on Instagram within a few hours. "You are really A Flying Jatt," commented a fan. "How did you do that?" read another comment.

On Monday, Tiger Shroff re-shared Will Smith's post on his Instagram profile, from the sets of his forthcoming film Student Of The Year 2, and wrote: "Sharing the stage with one of the greatest entertainers in the world! The pleasure was all ours sir!"

Sharing the stage with one of the greatest entertainers in the world! The pleasure was all ours sir! #Repost @willsmith On Set in Bollywood!! Shout out to the Cast & Crew of Student of the Year 2. Thanx for Letting Me Play. :-) : @westbrook @sadaoturner #willsmith #soty2

Tiger Shroff, who has mastered several forms of martial arts, is often seen sharing pictures and videos from his work out sessions. A few weeks ago, he shared a video, in which he could be seen doing a somersault. He captioned the post: "Failing as bad as I did in school. Still only humans fail. Wanna be Spidey."

Failing as bad as i did in school #stillonlyhuman #fails #wannabespidey

Tiger Shroff made his Bollywood debut with the 2014 film Heropanti. He has been a part of several high-octane action films such as Baaghi, A Flying Jatt and Baaghi. Tiger is currently filming Student Of The Year, co-starring Ananya Panday and Tara Sutaria. He will also feature in Siddharth Anand's untitled film co-starring Hrithik Roshan.