What Rakul Preet Singh Does When She Is "In Doubt"

"Get your sassy pants on," wrote Rakul 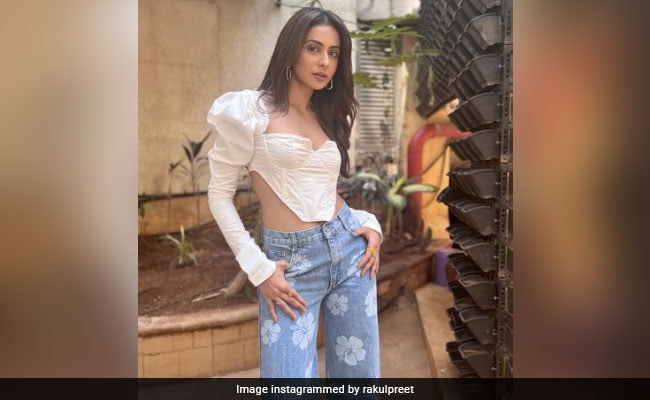 Rakul Preet Singh is a diva. Not many would disagree that the actress knows how to keep her fans hooked to her Instagram page. On a fine Saturday morning, the actress decided to bless our social media feeds with a stunning picture of herself. She is wearing a white corset crop top with floral denim. Well, Rakul Preet's caption equally needs all your attention. Referring to her OOTD, the actress wrote, “When in doubt get your sassy pants on.” Take a look at her picture here:

Now, look at Rakul Preet Singh lounging in her night suit. Why? Read her caption. "Feeling Green around green".

Before this, Rakul Preet Singh shared a series of oh-so-amazing pictures from one of her outings. Caption? She can't think of one. “Just can't think of a caption,” she wrote.

Rakul Preet Singh's last film Thank God was released a day after Diwali on October 25. The movie also featured Sidharth Malhotra and Ajay Devgn. It was directed by Indra Kumar. Ajay Devgn portrays the role of Chitragupt in Thank God. Whereas, Sidharth Malhotra's Ayan Kapoor is seen venturing “into the game of life and redeems himself of all his sins." At the time of the trailer release, Rakul Preet said, “Get ready for a Diwali extravaganza, because the game of life is about to turn the tables.”

Rakul Preet was also seen alongside Ayushmann Khurrana in Doctor G, which was released on October 14. Shefali Shah was also part of the film. Rakul Preet shared a BTS video from the shooting sets to introduce her character in the film. She wrote, “And, it looks like you all will be diagnosed with 'Lovaria' after meeting Dr Fatima from Doctor G.”

Rakul Preet  Singh, as per reports, is part of  ​​Meri Patni Ka Remake.

Team Pathaan On How They Made A Blockbuster. Pasta, Pizza Were Involved