What Janhvi Kapoor Has In Common With The Real Gunjan Saxena 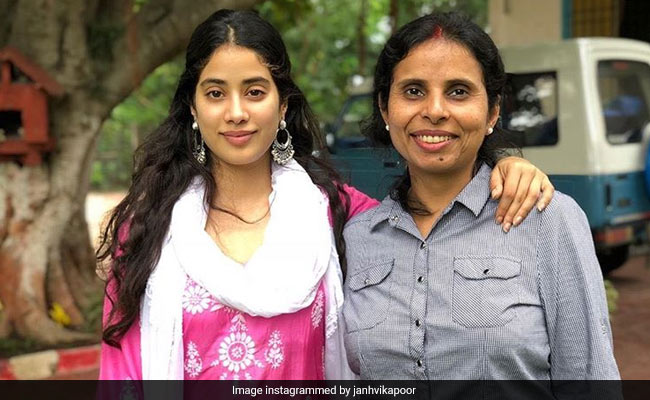 Actress Janhvi Kapoor, who will soon be seen in Gunjan Saxena: The Kargil Girl, shared a dad appreciation post for her filmmaker father Boney Kapoor just a day ahead of the film's release. In the biopic, Janhvi Kapoor plays the titular role of Indian Air Force officer Gunjan Saxena, who was India's first woman combat aviator to be commissioned into the war zone during the Kargil War. Talking about the many similarities she has with the real-life Gunjan Saxena, Janhvi said being blessed with the "best dads in the world" is one of them. "Me and Gunjan Ma'am have a couple of things in common; we love dessert, we have long arms, and we have the best fathers in the whole world. My biggest, cutest cheerleader. Love you. Sorry for troubling you. Throwback to chubbier, fun-er days," Janhvi captioned her post, along with a black and white photo of herself with Boney Kapoor. In the movie, actor Pankaj Tripathi plays the role of Gunjan Saxena's onscreen father, retired Lieutenant Colonel Ashok Kumar Saxena.

Me and Gunjan Mam have a couple of things in common; we love dessert, we have long arms, and we have the best fathers in the whole world. My biggest cutest cheerleader. Love u sorry for troubling u 🙈 #tbt to chubbier, fun-er days 🥰🌈

In the days leading up to the film's online premiere, Janhvi has been filling up her Instagram with photos of milestone moments from the shoot of Gunjan Saxena: The Kargil Girl. She shared this photo from the first day she met Gunjan Saxena.