What Hazel Keech Says About Planning A Family With Yuvraj Singh 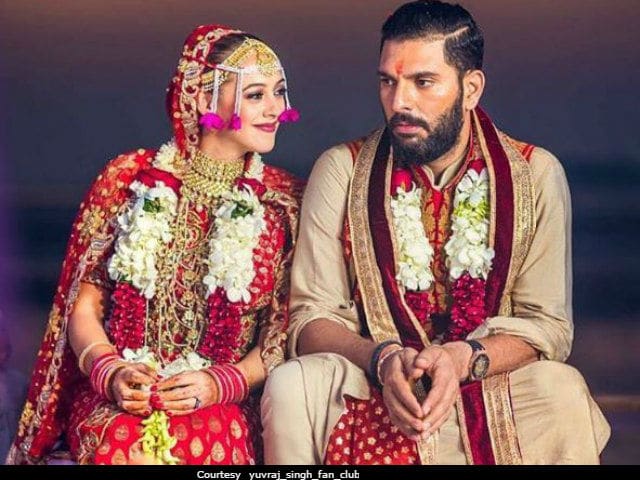 New Delhi: Actress model Hazel Keech and star cricketer Yuvraj Singh had lavish 10-day-long wedding celebrations last year and almost five months into their marriage, Hazel shared details about their 'plans' for extending the family. In an interview with Pinkvilla, Hazel revealed that becoming parents is not really on the card right now, especially given Yuvraj's busy schedule. Hazel also expressed slight concern over Yuvraj's probable absence during her pregnancy, reported with Pinkvilla. "Nothing set stone as of now. It'll happen when it has to happen as our marriage happened. It's destiny. I don't know how will it happen - if I am pregnant will he be around as he has to travel so much," Pinkvilla quoted Hazel as saying.

The first leg of Yuvraj and Hazel's wedding, which was tagged 'Yuvraj Hazel Premiere League', kicked off with a Sikh ceremony in Chandigarh, the cricketer's hometown. November 30's wedding followed by a Hindu-style shaadi in Goa, of which celebrity couple Virat Kohli and Anushka Sharma were the star guests.

Ahead of the wedding, Hazel had admitted (also on behalf of Yuvraj) to not having enough time to themselves. Now, she told Pinkvilla that she is accustomed to Yuvraj's busy schedules. "Between us, not really. I think we are kind of happier now and we both have the security of marriage with us. You know he is far busier now, so I hardly see him post marriage. We are exactly the same. We are very transparent in that sense," Pinkvilla quoted Hazel as saying.

Promoted
Listen to the latest songs, only on JioSaavn.com
In a separate interview with Pinkvilla, Hazel revealed that during Yuvraj's matches, dinner time is when the two get to catch-up. "As soon he finishes matches, he gets to the hotel room around 2 AM and then only we have dinner. It's difficult to have a structured routine. I am very happy. We just enjoy each other's company and we are kind of kiddish that way," Pinkvilla quoted Hazel as saying. Hazel Keech was recently spotted cheering for Yuvraj, who plays for Sunrisers Hyderabad, at the stands during one of his IPL matches.

Hazel Keech, 30, and Yuvraj Singh, 35, wrapped their wedding festivities on December 7 with a grand reception in Mumbai, whose star-studded guest list included biggies like cricketers M S Dhoni and Virender Sehwag, who arrived with their wives, and Sourav Ganguly. The duo are will reportedly join dance reality show Nach Baliye 8 as guests.