The actor went to a pub to promote the movie. 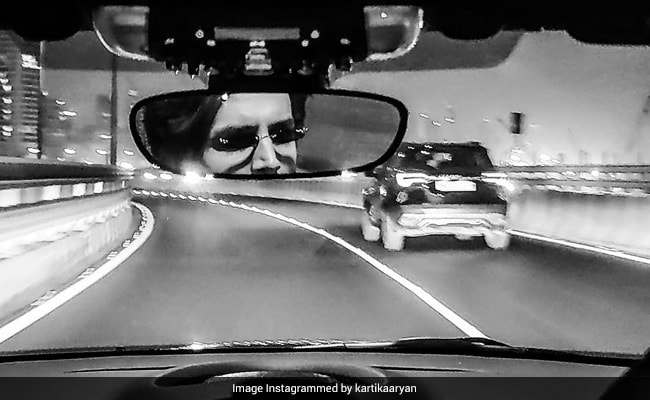 Most people find actor Kartik Aaryan's eyes bewitching and we are not at all surprised. It is because fans of the actor feel like they are in a Bhool Bhulaiyaa when they look into his eyes. Okay, we won't beat around the bush anymore and tell you exactly what we are talking about. On Friday, Kartik, who is gearing up for the release of his next film Bhool Bhulaiyaa 2, went to a pub to promote the film. And obviously, its title track is a peppy remake of the original song from Akshay Kumar and Vidya Balan's 2007 film Bhool Bhulaiyaa. It wouldn't be wrong to say that even after 14 years, the track Hare Krishna Hare Ram still makes us groove to its beats.

If you still remember the lyrics, you will agree with us when we say that they do justice to the plot of the original film and also its sequel. And that's why, Kartik Aaryan picked the lyrics of the song Hare Krishna Hare Ram to describe the vibe of his latest post, which features a photo of him on his way to a pub to carry out a promotional stunt. The image shows the interiors of a car with Kartik's half face, including his eyes covered with dark shades, reflecting on the rear-view mirror.

Fans were quick to jump into the comments section and complete the lyrics. “Baatein Hain Bhool Bhulaiyaa,” wrote one user. Another added, “Tere Sapnoo Ki Galiyon Mein, I Keep Looking For You Baby.”

Many also dropped red heart icons for the dashing photo of Kartik Aaryan. Check out his pots here:

Bhool Bhulaiyaa 2, which is the second installment of the 2007 horror-comedy Bhool Bhulaiyaa, shows Kartik Aaryan recreating the magic of Akshay Kumar's performance in the original film. Akshay featured as a psychiatrist in the 2007 film that also starred Shiney Ahuja as his friend Siddharth Chaturvedi and Vidya Balan as Siddharth's fiancee with a split personality. Her role as Manjulika is still our favourite and we are excited to see Kiara Advani stepping into her shoes for the 2022 film.

Kartik Aaryan, who is known for his performances in films such as Pyaar Ka Punchnama, Akaash Vani, Pyaar Ka Punchnama 2 and Luka Chuppi, picked an easy-breezy yet super cool look for promoting Bhool Bhulaiyaa 2 at a Mumbai pub on Friday.

Bhool Bhulaiyaa 2, directed by Anees Bazmee, will open in theatres on May 20.