Several celebs are reiterating government stipulated guidelines to fight the COVID-19 pandemic as the coronavirus cases are on the rise in India. 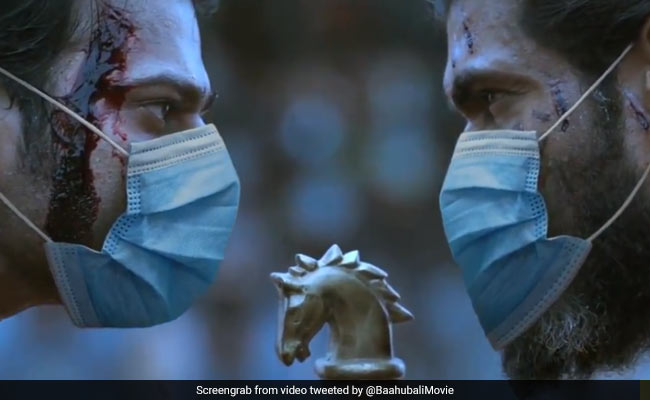 A still from the clip shared by team Baahubali. (Image courtesy: baahubalimovie)

Filmmaker SS Rajamouli shared an edited snippet from his film Baahubali: The Conclusion with a message on the fight against the coronavirus. The VFX team of Baahubali added masks to the characters of Baahubali (played by Prabhas) and Bhallaladeva (Rana Daggubati) in one of the final face-off scenes. Sharing the clip, Rajamouli wrote, "I hope everyone stays safe and exercise caution in these times." In the comments section, Rajamouli's Instafam shared ROFL emotions appreciating the clip, which urges people to wear masks to protect themselves against the coronavirus. The official social media handle of the film also shared the clip and wrote, "Precaution is the only way now with number of cases on the rise. Wear masks! After all, they are now mandatory even in Mahishmathi (the fictional kingdom where the film is set)."

Several celebrities are reiterating government stipulated guidelines to fight the COVID-19 pandemic as the coronavirus cases are on the rise in India. This is team Baahubali's effort:

Baahubali: The Conclusion, the second film in the two-part series, was among the top earning films of 2017 with an impressive Rs 1,500 crore box office collection worldwide. The film also featured Anushka Shetty, Tamannaah Bhatia, Ramya Krishnan, Sathyaraj and Nassar in pivotal roles.