The black-and-white photo appears to have been taken in the late Eighties or early Nineties, when Shah Rukh was still a budding actor 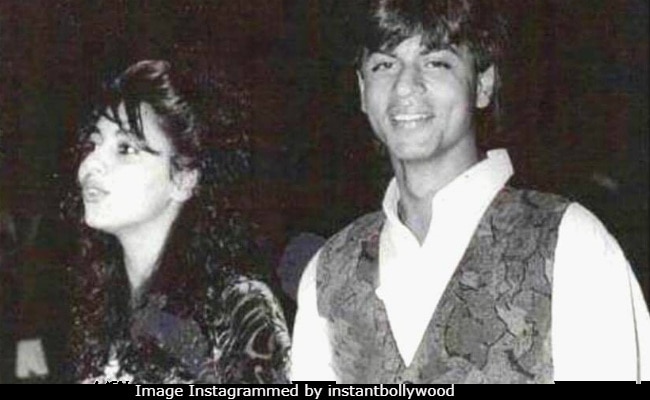 A photo of Shah Rukh Khan and Gauri, curated by the Internet, is doing the rounds on social media for being an example of all sorts of awesomeness. The black-and-white photo appears to have been taken in the late Eighties or early Nineties, when Shah Rukh was still a budding actor - SRK married Gauri when he was 25. In the photo, much younger versions of Shah Rukh and Gauri can be seen walking hand-in-hand. Shah Rukh's appearance in the photo sort of resembles his look from the popular TV series Circus, which aired between 1989 and 1990 and cast STK as Shekharan. Gauri's look too appears to be from the retro era as she styled her hair in a pouf and fringes.

Such a beautiful throwback pic of Srk & Gauri @InstantBollywood

Last year, Gauri treated us to this brilliant blast from the past featuring just the two:

Shah Rukh Khan and Gauri married in October 1991, a year after which Shah Rukh made his Bollywood debut with Deewana. The star couple are parents to three children - Aryan, 20, daughter Suhana, 18 and 5-year-old AbRam is the youngest one. Aryan is currently studying films in California while Suhana is in her final year at Ardingly College in London. Aryan stays with his parents in Mumbai.

On the work front, Shah Rukh Khan is currently busy with Anand L Rai's Zero, which releases in December. Shah Rukh co-stars with Katrina Kaif and Anushka Sharma in the movie. He is also producing the Netflix series titled Bard Of Blood, starring Emraan Hashmi.