"A moment like this makes life beautiful!," writes Suriya 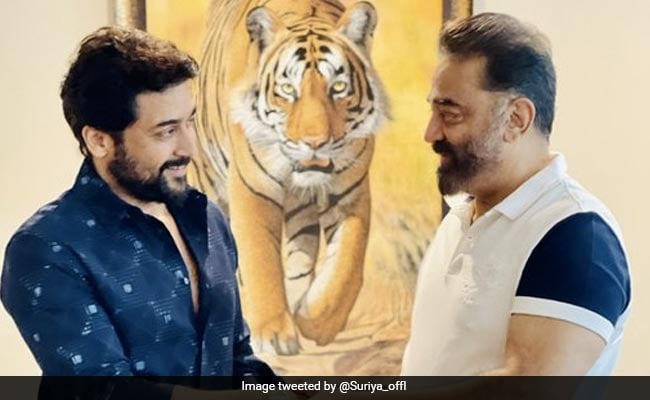 Kamal Haasan is basking on the success of his recently released film Vikram. Now, as the film is roaring at the box office, Kamal is busy giving the cast and crew special gifts as a token of gratitude. Among all is actor Suriya, who has received a special gift from the legendary actor that goes after the role he played in the film. The veteran actor personally met Suriya and gifted him his own Rolex watch. For the uninitiated, Suriya has a 10-minute cameo role in the film, wherein he plays the role of a character named Rolex, the head of the drug mafia. Suriya shared the pictures on his Twitter handle and thanked Kamal Haasan for the gift.

Suriya wrote, "A moment like this makes life beautiful! Thank you Anna for your #Rolex! @ikamalhaasan". Check out the post below:

A moment like this makes life beautiful! Thank you Anna for your #Rolex! @ikamalhaasanpic.twitter.com/uAfAM8bVkM

Suriya's performance in the film Vikram has been received well by the audience. On Tuesday, Kamal Haasan shared a video on his production house Raaj Kamal Films' official Twitter handle, thanking fans for the success of the film. In the video, he also thanked Suriya for accepting a cameo role and added that he would ensure a lengthier part in the next part of the Vikram franchise. Check out  the post below:

Meanwhile, Kamal Haasan has also gifted a car to the Vikram director Lokesh Kanagaraj. Sharing a picture of a new car, Lokesh thanked the legendary actor. He wrote, Thank you so much Aandavarey". Check out the post below: