Urvashi Dholakia's Pics With Her 23-Year-Old Twin Sons Are Viral. Seen Yet? 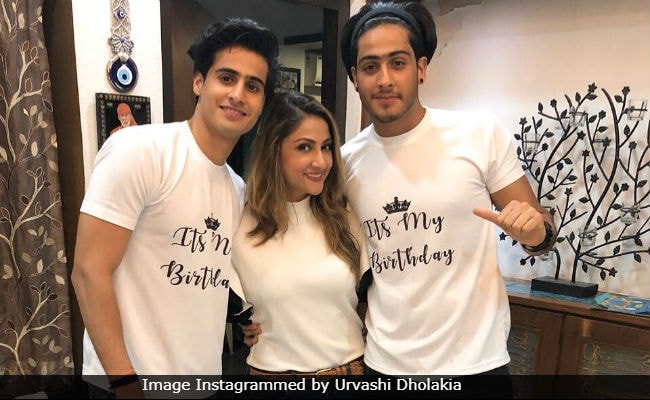 Urvashi Dholakia with her sons Kshitij and Sagar. (Image courtesy:

New Delhi: Remember Urvashi Dholakia, popularly known as Komolika Basu (who created quite a buzz with her statement bindis) from the television show Kasautii Zindagii Kay? She made it to the trends list on Tuesday. Why, you ask? The actress shared a video and multiple photos for her twin sons Sagar and Kshitij's 23rd birthday on her Instagram account and adorable can't even begin to describe them. In the pictures, all three of them can be seen sporting white t-shirts with captions like "It's my birthday" and "23" imprinted on them. Urvashi used captions like "happy birthday my jaan and "what can I say? I love you." In the video which is trending on social media, Urvashi has documented some of the best moments of her life with her sons.

@kshitijdholakia @_sagardholakia_ I AM BECAUSE OF YOU TWO LOVE U MY DARLINGS & HAPPY BIRTHDAY #godbless # Video courtesy: @rupeshjha14 thank u so much

Urvashi is a doting mother who raised her kids single-handedly. When she participated in reality show Bigg Boss, the 38-year-old actress was often seen missing her kids and her mother, who frequently appear in her Instagram posts.

Urvashi Dholakia made her debut with the 1993 television show Dekh Bhai Dekh and has featured in television shows such as Kasautii Zindagii Kay, Kahiin Toh Hoga, Kabhii Sautan Kabhii Sahelii and Kahanii Terii Meri among others. Most of the shows that Urvashi featured in were directed by Ekta Kapoor.

Promoted
Listen to the latest songs, only on JioSaavn.com
She is currently seen playing the role of Queen Iravati in the fantasy television series Chandrakanta. Urvashi Dholakia also participated and emerged as the winner of popular television reality show Bigg Boss Season 6.