Elli AvrRam wrote: "I'm really grateful to be part of the remake of such a timeless iconic song with stunning and powerful Urmila Matondkar" 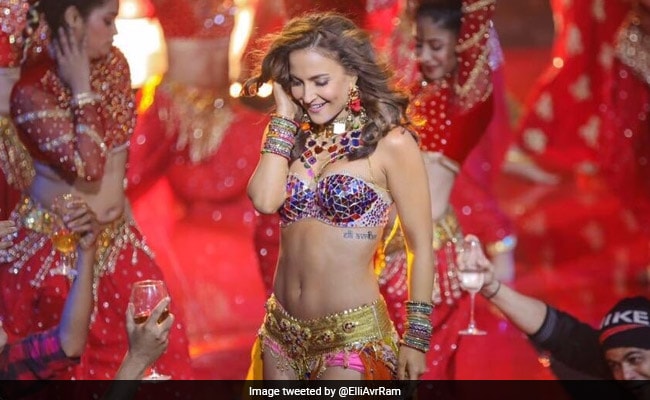 Elli AvrRam in a still from Chamma Chamma (Courtesy ElliAvrRam)

Elli AvrRam will recreate the superhit song of late Nineties Chamma Chamma, which originally featured Urmila Matondkar and was part of China Gate. The revamped version will be created as a part of the upcoming film Fraud Saiyaan, which features Arshad Warsi, Saurabh Shukla and Sara Loren. Elli AvrRam, who appeared to be ecstatic about being a part of the song, tweeted: "Coming soon ... very soon. Chamma Chamma recreation. But first I have to say I'm really grateful to be part of the remake of such a timeless iconic song with stunning and powerful Urmila Matondkar and a big thank you to Prakash Raj". The 28-year-old actress accompanied the post with pictures of herself from the song shoot. Adil Shaikh has choreographed the song while Neha Kakkar has sung the Chamma Chamma redux.

Coming soon ... very soon.
Chamma Chamma recreation.
But first I have to say I'm really grateful to be part of the remake of such a timeless iconic song with stunning and powerful #UrmilaMatondkar A big thank you to @tipsofficial@prakashjha27#ChammaChamma#ComingSoonpic.twitter.com/ySzZO0PA5U

Arshad Warsi, who also makes an appearance in the song, in an earlier interview to news agency IANS said: "I feel really good when you have a song that people have already liked and they can hum and dance to it. Chamma Chamma is very good song. It's brilliant as beats of this song are really interesting so, to have that song back again is wonderful. We have got Elli Avram dancing to it and she is bloody good in it. "When makers of this film approached me with this song, I remember I got so excited and I said yes to it because I wanted to be part of this song."

Speaking about his role in Fraud Saiyaan, Arshad Warsi said: "It is a very interesting film. Comedy and humour are not forced deliberately in the film. It will really seamlessly flow onscreen. The character which I am playing in the film is really interesting and it is one of those characters which every actor want to play."

Elli AvrRam made her debut on Indian television with Salman Khan's Bigg Boss 7. Her first Bollywood film was 2013's Mickey Virus, which featured Manish Paul. She has also featured in films like Kis Kisko Pyaar Karoon and Naam Shabana.