Trolled For Her Photoshoot During Cyclone Tauktae, Actress Deepika Singh Has This To Say

"I don't regret it but I would definitely request the audience to not step out in the rain," said the actress 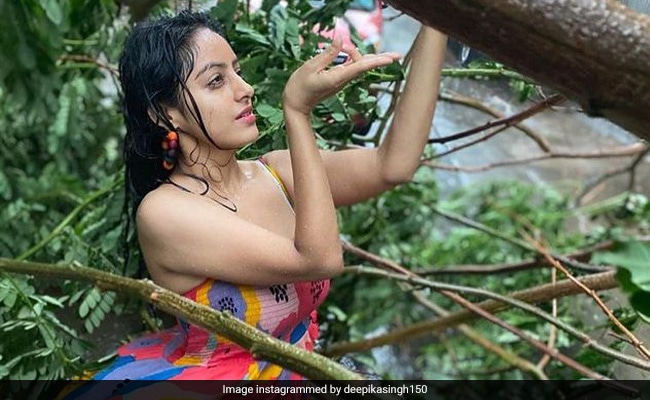 TV actress Deepika Singh occupied the spot on the list of trends a few days ago and not for all the right reasons. The Diya Aur Baati Hum actress, on Instagram, shared pictures from a photoshoot of sorts that she did at her Mumbai home during cyclone Tauktae. She was massively trolled for posting the pictures and a video of herself dancing in the rain with an uprooted tree in the backdrop. A section of the Internet schooled the actress for stepping out during the cyclone, while others labeled her posts as "insensitive" to some degree. The actress, in a recent interview with ETimes, reacted to the trolls and the idea behind sharing the posts on social media and she said, "I haven't seen any hate comments on my post. 99 percent of the comments I've received are positive. Rest 1 percent bad comments are on all the posts, even on my traditional dance posts, I receive negative comments." She added that she has "no regrets" and said, "I don't regret it but I would definitely request the audience to not step out in the rain, this area is right outside my house. Therefore, I stepped out for 5 minutes."

The actress, who had captioned her video, "You can't calm the storm, so stop trying," said during the interview that she will "not stop spreading positivity" and clarified that she stepped out for 5 minutes. The actress added, "The cyclone indeed was very scary and my heart goes out to all those affected and my only aim is to plant as many trees as I can. I will not stop spreading positivity, and this is for my well-being and happiness."

These are the posts that the actress posted earlier, for which she received flak on social media.