Trial By Fire Review: Eye-Opening Account Of A Disaster Delhi Is Unlikely To Forget

Trial By Fire Review: The impact is enhanced manifold by a performance of stupendous power from Rajshri Deshpande as Neelam Krishnamoorthy, who has been at the forefront of the campaign to prevent the misuse of power. 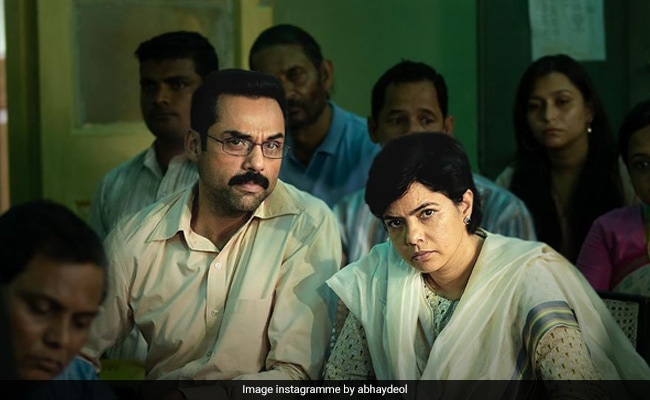 A still from Trial by Fire. (courtesy: abhaydeol)

A heart-rending real-life story waiting to be told for more than two decades is finally here in the form of a Netflix series directed by Prashant Nair and Randeep Jha. Does Trial by Fire, written by Nair with Kevin Luperchio, hit home hard enough? It does.

The sobering Trial by Fire is a watchable and eye-opening account of a disaster that Delhi is unlikely to ever forget. The show is aided by pointed writing, unflashy but effective execution and splendid performances from the key actors.

The seven-episode series captures, subtly and piercingly, the trauma of a tough and tenacious Delhi couple who lost their two children in the Uphaar cinema fire on June 13, 1997 and then, with the support of lawyers and the relatives of the others who died that fateful afternoon, fought tooth and nail to bring those responsible for the tragedy to book.

The show trains the spotlight on the protracted and arduous war that Neelam and Shekhar Krishnamoorthy have waged to ensure that the real estate tycoons who owned the cinema hall are punished for their cavalier disregard for safety norms.

It tells a grim tale of grief and grit without taking recourse to overly melodramatic means. The sustained restraint imparts to the narrative genuine poignance.

The tragedy occurred 26 years ago and the subsequent court proceedings have been in the news off and on. Trial by Fire, an Endemol Shine India production in association with House of Talkies, perforce has to reckon with the likelihood of not being able to add anything new to the discourse that has played out.

Yet, in terms of form, substance and approach, Trial by Fire incorporates components that lend the narrative the kind of universal relevance that goes beyond one case and turn it into a cautionary tale not bound by time. It points to the shocking culture of callousness and impunity that informs the way public facilities are often run in this country of a billion-plus people.

It is hardly surprising that Neelam and Shekhar's battle for justice is not over. But they have never been assailed by thoughts of giving up. It is their exemplary resilience that the series showcases. It depicts the challenges that the couple has had to face owing to a slothful judicial system loaded in favour of those who have the power and the wealth to run all resistance to the ground.

Trial by Fire is an intense dramatization of the circumstances in which the accident occurred and an incisive portrayal of the response of the victims spearheaded by the Krishnamoorthys and of the combination of legal stonewalling, veiled threats, financial inducements and tampering with evidence that the powerful owners of the cinema hall resorted to in order to save their skins.

Trial by Fire focuses as much on the personal pain suffered by individuals - none more so than an old man who lost all seven members of his family in the fire - as on the very public setbacks that confronted the Krishnamoorthys as they went about mobilising support for their legitimate legal battle against the culprits.

The strand of the story that focusses on the agony of the bereaved parents is understandably accorded the greatest importance, but it is also intertwined imperceptibly with the complicated legal processes that the litigants have had to understand and get on the top of as they have wended their way through the system on behalf of the victims of the Uphaar Cinema fire.

The script adopts a consistently solemn tone to convey the magnitude of the Krishnamoorthy's loss and sorrow. The impact is enhanced manifold by a performance of stupendous power from Rajshri Deshpande as Neelam, who has been at the forefront of the campaign to prevent the misuse of power and pelf to escape culpability.

Abhay Deol in the role of Shekhar is terrific too but so phenomenal is the impact of Deshpande's scalding interpretation of the anguish and determination of a distraught mother standing firm before an unfair, loopholes-ridden system that everything else in Trial by Fire pales a touch in comparison.

She articulates a range of emotions - from shock and grief to indignation and fortitude - often without uttering a word. The camera is frequently focussed on Deshpande's face, which maps both hurt bereavement and bristling anger with equal force.

Nimisha Nair, playing an eager and fastidious understudy to a legal eagle (Atul Kumar) who represents the Krishnamoorthys in court, makes a strong impression in a role that is somewhat peripheral in nature, but neither the script nor the performance allows it to feel like one at any point.

The show also writes into its core two significant roles for a pair of accomplished actors - Rajesh Tailang and Ashish Vidyarthi. The former is cast as Veer Singh, a Delhi electricity board worker who is made a scapegoat because he happened to be the one who repaired the transformer that exploded and started the Uphaar fire.

Veer Singh is in and out of jail even as his daughter gears up for her wedding and life goes on as usual for his wife and married son. Most of the scenes that Tailang is in are filmed by cinematographer Saumyanand Sahi in long uninterrupted takes that weave patterns around the man's cramped home and its immediate environs, creating a sense of a trap without an exit chute.

Ashish Vidyarthi plays a dry fruits importer who serves as an unscrupulous middleman between the powerful men seeking to cover their tracks and those among the victims' families who are amenable to manipulation and are fine with living down the tragedy and moving on. Both actors are brilliant without having to break a sweat.

Another significant layer in Trial by Fire is provided by the gender dynamics that are at play. The most significant of these is the relationship between Neelam and Shekhar. Both are equally determined not to leave anything to chance, but it is often apparent that Neelam is more fiercely committed to the cause of justice although there is no overt recriminations or finger-pointing from either.

The gender split is underscored in more explicit ways in two particular scenes. In one, the industrious junior lawyer articulates her anger and frustration at being treated with condescension, if not outright disdain, by her boss, a highly regarded advocate who relies on her meticulous research, memos and briefs without acknowledging her contribution.

In another scene, an all-out domestic confrontation erupts between a prematurely-retired war veteran (played by Anupam Kher) and his wife (Ratna Pathak Shah) over how their marriage has deprived them both of the things that they really held dear.

These passages in Trial by Fire are but sideshows in the larger, heart-wrenching tale of lives cut short and the consequences of an event that have been as agonising and unsettling as the tragedy itself. Not to be missed.