Erica Fernandes, who is all set to play Prerna Basu in the remake of Kasautii Zindagii Kay 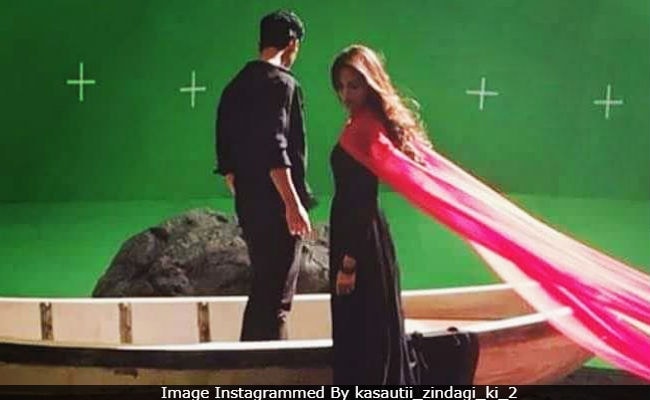 Folks, here's an update about the much-talked about remake of cult show Kasautii Zindagii Kay, which starred Shweta Tiwari and Cezanne Khan. Erica Fernandes, who is all set to play Prerna Basu in the remake, has apparently shot for the show's promo. Pictures of Erica, who was last seen in Kuch Rang Pyar Ke Aise Bhi, dressed in a black outfit and red dupatta, have been shared by fan clubs. Her look is very similar to that of Shweta Tiwari's appearance in the teaser of Kasautii Zindagii Kay. Several unconfirmed reports state that Erica will star opposite Shaheer Sheikh, her Kuch Rang Pyar Ke Aise Bhi co-star, whom she's rumoured to be dating. However, there hasn't been any confirmation on that.

Take a look at Erica's pictures.

Earlier this year, the producer of the show Ekta Kapoor had shared a cryptic post about rebooting a particular show, which ran for nine years.

With a piece of my broken heart I wrote in 2001 ...17 years later I ' reboot' it dipping it in personal pain and lacing it with experiences of an older me! Bringing back my most successful love saga that ran for 9 years!!! Again I'll take my broken heart n make it into art!!! #namestobeannounced #waitfortheannouncement

This week, she tweeted this.

So met @StarPlus team yest !emo moment for me!! About to announce a ' remake' of a old epic saga!let d ride of nostalgia begin JAI MATA DI

"Kasautii has always been special for Ekta and now that she is rebooting it, she is keeping a close watch on all developments. The teaser has been shot to officially announce the series and a complete promo will be released once the male lead is locked. The creatives are quite kicked about adapting the show in today's time and the channel is also betting on the show to garner some ratings for it," source told Indian Express.

Promoted
Listen to the latest songs, only on JioSaavn.com
Kasautii Zindagii Kay went on air in 2001 and ran successfully for about eight years. Ronit Roy and Urvashi Dholakia were also part of the show.

Excited about Kasautii Zindagii Kay remake? Tell us in the comments section.