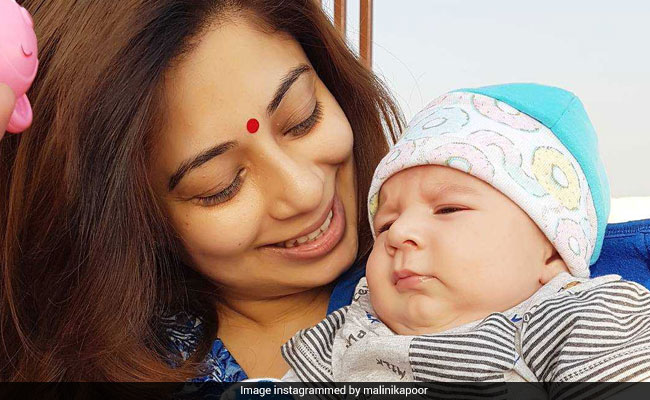 New Delhi: Actress Malini Kapoor took the top spot on trends list on Tuesday after she shared an adorable picture of herself with her baby boy Kiyan Sharma. Malini delighted her fans and shared the picture, in which she is all smiles and little Kiyan is just busy being adorable. "After a long wait .. today I finally chose to show my baby to all my beautiful people ok guys so here he is ... master Kiyan Sharma for you," Malini captioned the picture. The comment section is filled up with compliments like "too cute," "adorable" and "beautiful." One user also mentioned that Malini's photo with her baby boy made his day and we can't agree more.

This is the picture we're talking about.

after a long wait .. today i finally chose to show my baby to all my beautiful people ok guys so here he is ... mastr kiyan sharma for you

Malini Kapoor is married to Ajay Sharma. Kiyan was born to the couple in December, last year. Malini and Ajay often delight their fans with cute pictures of Kiyan. Sometimes Kiyan is seen taking a sunbath with his grandmom while in the other he's seen sweetly sleeping in his mother's arms.

Malini met her husband on the sets of TV show Love U Zindagi and married in 2014. Before her son Kiyan was born, Malini had shared that she was both nervous and excited for the baby. Earlier, in an interview with news agency IANS, Malini said, "As November is getting closer, my heart is beating faster. It's a mixed feeling. I am scared and excited at the same time. Each morning is different. Sometimes I feel scared because of the pain I may have to go through during delivery, and excited because soon I will have my baby in my arms."

"I am not going to work for at least a year though advertisements and other not so regular things are always welcome," Malini told IANS at that point. Malini has featured in shows like Balika Vadhu and Kumkum.