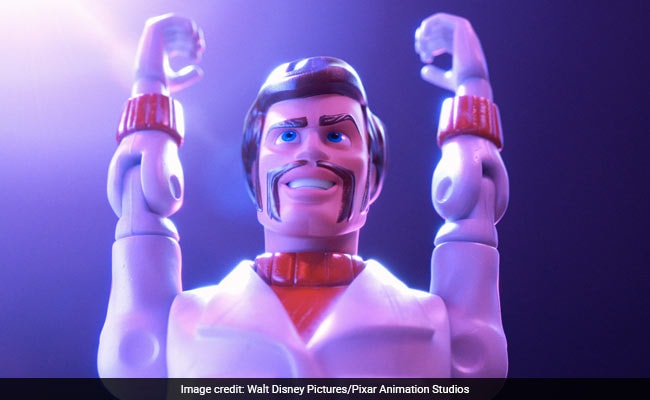 Toy Story 4 producer Jonas Rivera says it is one of his favorite moments ever at Pixar Studios. The film's creative team members had come up with a minor role - that of a motorcycle-riding toy - and they were interested in having Keanu Reeves provide the voice.

The thing was, it was envisioned only as a "gag character," Rivera recalls - a Canadian daredevil action figure named Duke Caboom, a stuntman evocative of Evel Knievel's era, who might get a few one-liners.

After Pixar became intrigued following a "blind" audio test, though, Reeves requested a lunch meeting before officially saying yes. Soon, the John Wick actor pulled up to the Emeryville, California, studios riding his motorcycle - and he had questions.

"Is Duke mad at Rejean?" Reeves asked, referring to the boy who had owned the toy, Rivera recounts. "Is he mad at the TV commercial" that popularized him?

"We were workshopping this character over lunch," Rivera says, and Reeves "started to become Duke right in front of us, doing the (karate) chops and getting on a table in the atrium. People walked by (in disbelief): 'Is that Keanu?' "

"He became that character - really emoting and getting into it - no different from any other role. He's a delight to work with."

By the time the collaboration was complete, Duke Caboom was a fleshed-out, scene-stealing character - another highlight, too, in Reeves' banner year.

Here are some other production secrets, surprises and Easter eggs from the film, some of which are illuminated in the new book The Art of Toy Story 4 (Disney/Pixar/Chronicle Books):

The one-man band of a plastic music-maker can be glimpsed amid all the film's antique toys. Rivera tells The Washington Post that the appearance of Tinny is a nod to "Tin Toy," John Lasseter's Oscar-winning 1988 animated short that helped boost Pixar a step closer to feature filmmaking.

- Bo was reminiscent of a "Rosie"

Team Bo - the self-named crew of more than a dozen Pixar talents who collaborated on remaking a bolder Bo Peep for this film - designed many iterations of the adventuresome shepherd. In one version, Bo, while on a mission in an antique shop, wore a turquoise-tinted work outfit and a red hair scarf - a look inspired by the World War II poster icon Rosie the Riveter.

- Forky rose from a 3-D workshop

The frenetic new character Forky, the craft spork toy made by the film's kindergarten child Bonnie, wasn't designed solely by computer or on the drawing pad. Instead, in an exercise nodding to Bonnie's mode of creation, Pixar held a "Forkshop" - a workshop in which crew members created their own real-life Forky design models out of pipe cleaners, googly eyes, Popsicle sticks and, of course, sporks.

Much of the Toy Story 4 action occurs in a single antique shop. But in an early version, the store was "a huge city" that "came alive at night," according to The Art Of Toy Story 4. This toy town revolved around "a cut-throat economy where toys bartered and sold parts to repair themselves," all in the hopes of being owned by a new child.

- Bo had an extended flashback

Bo and Woody reunite in Toy Story 4, and at one point, the film included a visual explanation of Bo's journey from a former part of Andy's menagerie to a tough life of being donated, broken and long stored away before she went childless. "Although emotional," director Josh Cooley writes in The Art Of Toy Story 4, "the flashback was ultimately cut as the story evolved."

- The man who was not there

Initially, the film's antique shop was run by an older couple, named Margaret and Dan - inspired by the designs of Ollie Johnston, one of Disney Studios' famed Nine Old Men. Margaret ultimately made the cut, as voiced by June Squibb (Nebraska); Dan, alas, did not.

- Bunny once had the tapes

Ducky and Bunny, the carnival-prize plush toys voiced by Keegan-Michael Key and Jordan Peele, underwent numerous character iterations - with Bunny at one point becoming a storytelling toy that had a cassette player lodged smack into his tummy. That character's name: Buster Cottontale.

- The dummy speaks to the director's fandom

"I love ventriloquist dummies - I had one as a kid," Cooley tells The Post of why he stocked the film's antique shop with eerie dummies that follow the orders of "villainous" doll Gabby Gabby. "I'm a huge fan (of them) in 'The Twilight Zone' and creepy movies."

- More legendary voice work is on the way

And they'll get "considerable screen time," says producer Mark Nielsen, when they reprise their roles in a short film, planned for November release, titled Forky Asks A Question.