"We have loved sharing our moments of love and happiness with you and can't wait to be back," wrote KJo 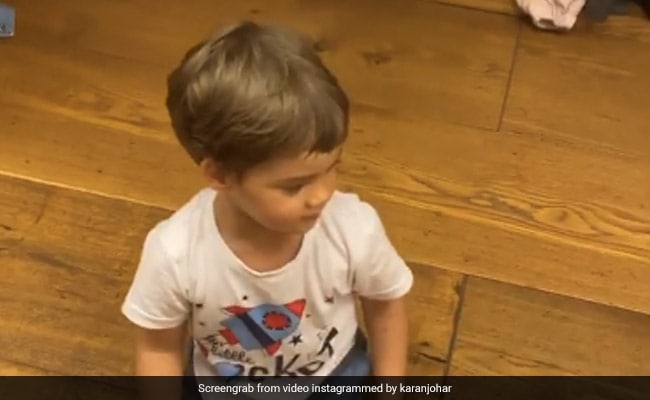 Karan Johar's videos with his kids Yash and Roohi are oodles of cuteness. On Monday, KJo Instagrammed another snippet of the twins' time in his closet, but this time to say goodbye. Adding to his series "lockdown with the Johars," Karan Johar referred to the unlockdown happening in the country and shared the video of Yash and Roohi, where they bid farewell to their viewers. KJo's series "lockdown with the Johars" was a compilation of his lockdown activities with his family - son Yash, daughter Roohi and mother Hiroo Johar. Through his videos, KJo gave his Instafam hilarious glimpses of his family time - from his twins laughing at his sartorial dressing choices to his singing. In the recent video, Yash and Roohi can be seen hanging out in KJo's walk-in closet. KJo, who was in charge of the camera, can be heard asking Yash and Roohi to say goodbye and "toodles," to which Yash hilariously says, "Good morning." In another part of the video, Roohi can be seen walking out of the closet with her school bag. KJo shared the video on his Instagram profile and wrote, "So long farewell. Alvida! Thank you for the abundant love you have all showered on us! We have loved sharing our moments of love and happiness with you and can't wait to be back (not with a lockdown, of course). This is our final goodbye to lockdown with the Johars." KJo also added the hashtag "unlock1" to his post.

So long farewell!!!! Alvida! Thank you for the abundant love you have all showered on us! We have loved sharing our moments of love and happiness with you and can't wait to be back ( not with a lockdown ofcourse) this is our final goodbye to #lockdownwiththejohars ! #unlock1

Within minutes of posting, KJo's video was flooded with comments from KJo's friends and members of Yash and Roohi's fan club. Anushka Sharma, referring to Yash in her comment, wrote, "nope he doesn't want to say toodles," while Riddhima Kapoor Sahni dropped a kiss emoticon.

KJo's "lockdown with the Johars" series has been super entertaining with snippets of Yash and Roohi's activities in lockdown. We have picked up a few of the videos, take a look:

The one where Yash and Roohi sat for KJo's screen test:

We had a screen test done today! #lockdownwiththejohars #toodles

Yash and Roohi found a perfect place to chill - their toy cabinet.

The one where Yash and Roohi called KJo a monkey. "Ok I have a new name now," Karan Johar captioned the video. LOL.

Karan Johar's twins, Yash and Roohi were born via surrogacy in 2017.