"They Took My Tee Seriously": Sunny Leone Is As Thrilled As You About Shaktimaan

Sunny Leone shared a couple of pictures featuring herself dressed in a pair of shorts and a crop top which read, "Bring back the 90s" 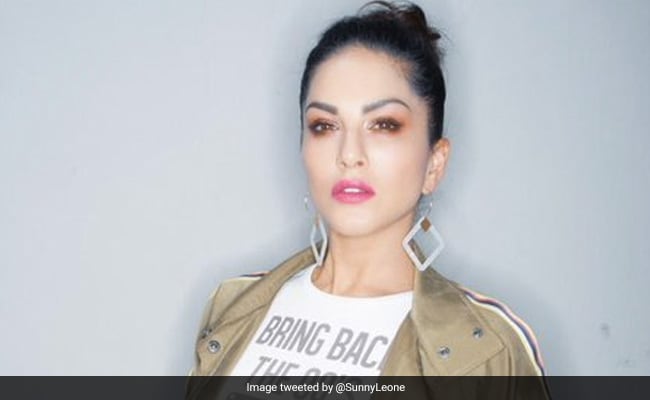 A whole bunch of shows from the golden age of Doordarshan are returning to the small screen amid the nationwide 21-day lockdown against the Coronavirus and actress Sunny Leone says you can thank her - or rather, her t-shirt - for it. Nineties superhero Shaktimaan, starring actor Mukesh Khanna in the eponymous role, is the latest addition to Doordarshan's 2020 line-up and guess who owns a t-shirt that reads "Bring back the 90s"? Sunny Leone, it is. The 38-year-old actress posted pictures of herself wearing it and wrote, "Wow, they took my tee seriously. Guess what's back on DD?" See her post here:

Wow..they took my tee seriously!!
Guess what's back on DD?#SunnyLeone#Ramayana#Mahabharat#Shaktimaanpic.twitter.com/ZnlmxkaLbd

Shaktimaan, which begins airing on April 1, has been trending furiously ever since the rerun was announced:

Doordarshan is all set to telecast Shaktimaan, the famous serial featuring Mukesh Khanna, for 1-hour daily on DD National network from April 2020 at 1 PM: Government of India

Then, as now, it all started with Ramayan, epic viewing in every sense. Ramayan, which ran from 1987-1988, was the first of Doordarshan's mega serials and was followed by Mahabharat. After days of clamour for reruns on social media, Information and Broadcasting Minister Prakash Javadekar announced last week that Ramayan was being brought back "on popular demand." Mahabharat was quickly added, as were Circus, starring Shah Rukh Khan, and Byomkesh Bakshi, with Rajit Kapoor in the title role.

As for Shaktimaan, Mukesh Khanna hinted at a possible sequel to the show in a recent interview with Bombay Times. He was quoted as saying, "For the last three years, we have been working towards bringing out the second edition of Shaktimaan, which is contemporary, but rooted in our values. We were working on the sequel because people wanted to know, aage kya hua."

Ramayan and Mahabharat are aired twice a day on DD National while Shah Rukh Khan's Circus and Rajit Kapoor's Byomkesh Bakshi are aired once a day. Channels such as Colors and Star Plus are also falling back on reruns since all ongoing projects have been suspended because of the Coronavirus pandemic.