The Trial Of The Chicago 7 Review: A Triumph From Start To Finish 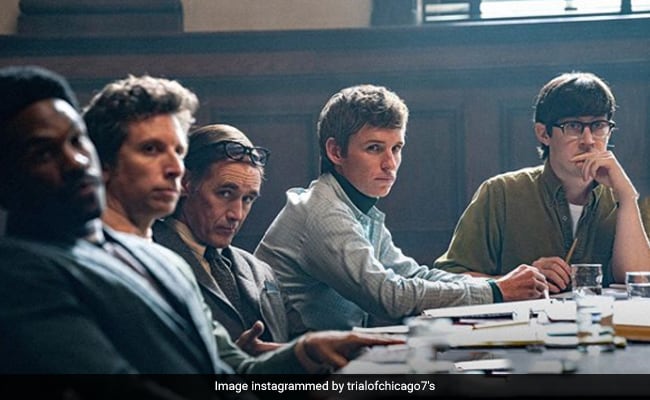 The Trial Of The Chicago 7 Review: A still from the film. (courtesy YouTube)

Conceived nearly a decade before Donald Trump moved into the White House, The Trial Of The Chicago 7 is set in a specific time, place and political context. The film has, therefore, got to be assessed first and foremost on factual accuracy and thematic acuity. Once that is out of the way, the perennial resonance of the story kicks in. It is unmistakable and urgent. The Trial Of The Chicago 7, written and directed by Aaron Sorkin, re-enacts a particularly murky sideshow in which, just as much as the titular group of anti-war protesters taken to court by the US government to be made an example of, the entire nation was on trial.

Aaron Sorkin's outstanding screenplay tweaks factual details to sharpen the courtroom drama that transfixed the US in the late 1960s. Neither the essence nor the purpose of the retelling dwindles one bit in the bargain. Sorkin's writing is scintillating. His directing skills are a notch or two lower but good enough not to let the script lose its innate heft.

The film's focus on an act of political resistance at a time when the might of the state - concentrated in its executive machinery, police force and judicial system - was unleashed in an indecorous, arrogant manner has a universal ring. The ugly upshots of the suppression of dissent are as close to the bone today as they were when the USA was transitioning from Lyndon B. Johnson to Richard Nixon.

Fifty years on, the crisis has only worsened. The world has been all but overrun by megalomaniacs who know no better than to ride roughshod over propriety, grind honesty to the dust and, as a ploy to deflect blame for their abject failures, go all out to intimidate those who stand up against injustice and systemic abuse of power.

While the burden of the ever-pertinent message sits easy on the film, what makes The Trial Of The Chicago 7 especially phenomenal is an ensemble cast on song. The film hits the ground running, plunging into the essence of the drama and introducing the 'Chicago Seven' in quick succession as they set out for a planned anti-war protest rally. The emphasis shifts thereafter to the courtroom battle and its riveting repercussions.

Yahya Abdul-Mateen II (as Black Panther Party national chairman Bobby Seale, the eighth defendant who is severed from the trial but not before he is subjected to unspeakable indignities), Sacha Baron Cohen (as the defiantly irreverent Yippies founder Abbie Hoffman), Eddie Redmayne (as the smouldering Students for a Democratic Society leader Tom Hayden, who, with the help of a diligent associate, keeps count of the US soldiers dying in Vietnam), Joseph Gordon-Levitt (as federal prosecutor Richard Schultz), Mark Rylance (as defence counsel William Kunstler) and Frank Langella (as Judge Julius Hoffman) deliver electrifying performances.

In fact, in The Trial of the Chicago 7, every single actor has the opportunity to shine bright, not the least Michael Keaton, who has only two scenes playing LBJ's attorney-general Ramsey Clark. Faced with questions from Gordon-Levitt's federal prosecutor, Keaton's ex-AG opts for piercing, pregnant pauses that temporarily but significantly alter the rhythm of the war of words in the court.

The writing, as has already been emphasised, is sparkling. Sorkin began working on the script in 2007. No wonder the script feels so finely balanced, so flawless, so filled out with telling minutiae. The inevitable chaos of the riots of 1968 is captured in scenes (these are strewn across the film) leading up to a violent confrontation between the Chicago police and anti-Vietnam War protesters during a Democratic National Convention.

But none of the bedlam that erupts around the venue in late August 1968 is fully mirrored in the rat-a-rat conversations between the key players or in their animated exchanges with Schultz and Judge Hoffman. The men accused of crossing state lines and fomenting trouble are acutely aware that they are fighting a losing battle, but they always have their wits about them. Even in the face of grave provocation, they are perfectly poised when they verbalise their core ideas - either to each other (as Hoffman and Hayden do in animated fashion more than once) or to the federal prosecutor and the judge.

One is left with the nagging feeling that a little more waywardness in the words that tumble forth from the mouths of the defendants as they face a judge brazenly predisposed against them and an unwavering defence counsel hell-bent on sticking to his brief might have more aptly captured the alarm, indignation and disdain of the men in the dock.

The actors, of course, convey it all with stunning aplomb, but the lines that they speak are sometimes text-bookish. Come to think of it, that makes the performances even more praiseworthy. It takes some doing for the actors to convey the impression that the dialogues that they are delivering are spur of the moment utterances rather than lines that have stemmed from years of drafting by a skilled screenwriter. The Trial of the Chicago 7 retains the artful while it, thanks to the stunning spontaneity of the actors, radiates an air of sustained free-spiritedness.

The vigour and intensity Cohen, Redmayne, Jeremy Strong (playing Youth International Party co-founder Jerry Rubin), Rylance and Gordon-Levitt pump into the theatrics and the ever-so-slight pauses for breath that they take work wonders and inject credibility into the key confrontations and discussions.

The counterculture activists hauled before Judge Hoffman do not stand much of a chance. "The whole world is watching": that is a refrain that runs through the film. But do the men in positions of power really care for niceties? They obviously don't. In driving home that point, The Trial of the Chicago 7 does a superb job of outlining how democracy is in constant danger of being manipulated and mauled to crush dissent especially when power falls into the wrong hands.

Aaron Sorkin turns his vibrant take on a 1969 legal joust that lasted seven months - one of the most infamous trials in US judicial history - into a commentary that transcends its specific context and speaks to us all, across decades and geographies. From start to finish, The Trial Of The Chicago 7 is a triumph.