The Magic is Back: Harry Potter Play Hits London Stage 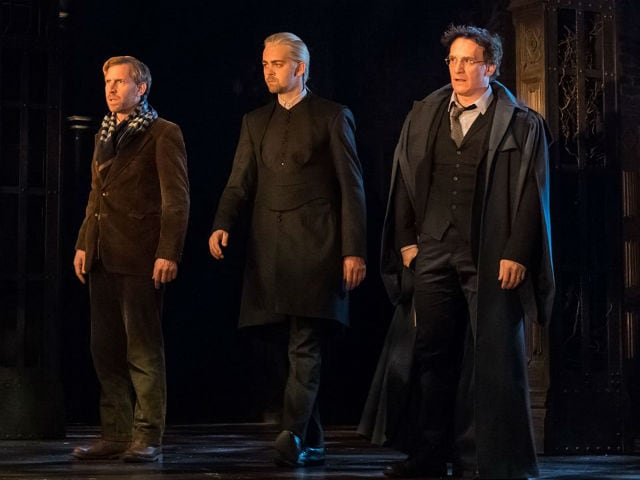 This image was posted on Facebook by Hary Potter and the Cursed Child.

London: Harry Potter fans were buzzing with excitement on Saturday as Harry Potter and the Cursed Child, a stage play that imagines the fictional boy wizard as a grown-up father of three, opened in London.

After nearly eight weeks of well-received preview performances, London's Palace Theatre hosted the opening gala as the general public strapped themselves in for a new adventure in the saga that has captivated millions around the globe.

Arriving for the opening gala, creator JK Rowling told the Press Association that she was "so happy" that fans had heeded her pleas to keep the plot a secret, and said she hoped the play would one day appear on Broadway.

Set 19 years after the events of JK Rowling's seventh and final book,Harry Potter and the Deathly Hallows, the play sees a grown-up Harry Potter working at the Ministry of Magic.

The official plot outline for the play read: "While Harry grapples with a past that refuses to stay where it belongs, his youngest son Albus must struggle with the weight of a family legacy he never wanted. As past and present fuse ominously, both father and son learn the uncomfortable truth: sometimes, darkness comes from unexpected places."

Like many of his fans, Harry Potter has now grown up and has three children with his wife Ginny Weasley, the sister of his friend Ron. He still has his trademark round-rimmed glasses and the scar on his head, a permanent reminder of his nemesis Lord Voldemort, but must now help his youngest son Albus confront the family's dark past.

Harry Potter and the Cursed Child is currently sold out, but another 250,000 tickets are set to go on sale next week as the play's run has been extended until December 2017.

'Written with fans in mind'

The script was to be released in Britain at midnight on Saturday (2300 GMT), with bookshops planning to stay open into the wee small hours to satisfy the desires of Harry Potter fans. July 31 is the birthday of both JK Rowling and Harry Potter.

Several hundred fans, many dressed as the wizard, snaked down famous London street Piccadilly waiting to get their hands on a copy, bringing traffic to a slowdown and attracting bemused looks from tourists.

"Oh God, this is one of the biggest things I've ever done," said Jenny Reid, 36, who had come from Virginia, United States, just to see the play.

"I waited for eight hours to get the tickets and I've been waiting for this moment for nine months," she added.

"When the last book was released I was 10 so I was excited for it, but not as excited as I am now," said Rebecca Westbrook, 18, who will see the play in December.

"I was going to wait to see the play before I read it, but as soon as I booked the ticket I was like 'I'm not going be able to wait."

"My brother's seen it and he loved it, he knows I'm going to love it." JK Rowling's books have sold more than 450 million copies since 1997 and been adapted into eight films.

Albus Dumbledore actor Sam Clemmett has been a big hit, as has Anthony Boyle as Draco Malfoy's son Scorpius.

The theatre show is written by English screenwriter and playwright Jack Thorne, based on an original story co-written with Rowling and the play's director John Tiffany.

"Judging by the whooping and cheering, nobody was disappointed," Clare Fitzsimons wrote in the Daily Mirror newspaper after the first preview showing last month.

"It's a great show, and it's well done -- entertaining and interesting for adults and children," Anna, 30, told AFP after a preview show. "The play was written with the fans in mind," she added.