The Human Voice Review: The face and voice of Tilda Swinton is a luminous appendage. So dazzling is the film and so scintillating its sole actor that you can never have enough of either. 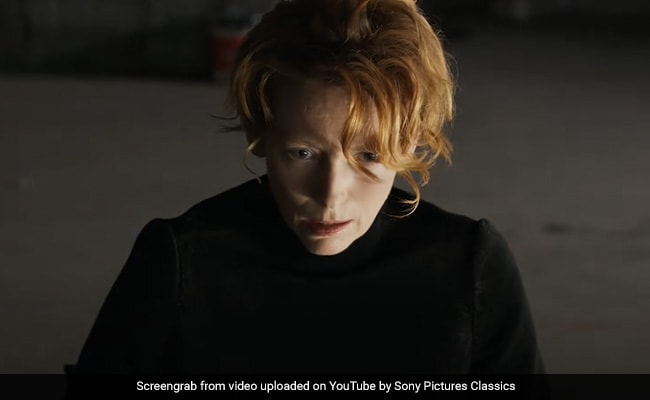 The Human Voice Review: Tilda Swinton in a still from the film. (courtesy YouTube)

In the richly textured, precisely structured The Human Voice, his first English-language venture, Pedro Almodovar gives full rein to his quirky, hypnotic cinematic vision. He stamps his style on every frame of the short fiction film in terms of colour, music and narrative sleights.

The Human Voice, a free, felicitous adaptation of a Jean Cocteau monodrama, is anchored by a sublime Tilda Swinton. Almodovar draws primary inspiration from the French play but, as he did so wondrously in Women on the Verge of a Nervous Breakdown (1988), he revises much of it to suit his creative ends. He reimagines the female protagonist's response to the abrupt, painful termination of a love affair.

In Women on the Verge... Carmen Maura, one of the Spanish director's early muses is television actress Pepa Marcos. Pepa casts her shadow on the past-her-prime actress in The Human Voice who is led by her agent to believe that "women of her age are fashionable again". Clients, she says, "like my pallor... that mixture of madness and melancholy". You instantly know that she is a classic Almodovar heroine.

Neither is that all. Law of Desire (which Almodovar made a year before Women on the Verge...) - is evoked in a line Swinton speaks late in this film. Maura's Tina Quintero, in the 1987 film, is offered the role in The Human Voice by her film and theatre-director brother Pablo. The Cocteau play has been on Almodovar's radar for a long time.

The Human Voice, available in India on BookMyShow Stream, masterfully condenses the Almodovar universe within a single apartment, which, as the camera reveals a few minutes into the film, is a set erected in a studio. Of course, the face and voice of an unwaveringly spot-on Swinton is a luminous appendage. So utterly dazzling is the film and so scintillating is its sole actor that you can never have enough of either.

A woman has been dumped by her lover without so much as a goodbye. She sits with his things packed in two suitcases, waiting for him to personally pick them up from the home they shared until three days ago. The man has abandoned his dog, too. The animal is restless, unable to fathom where his master has gone.

Two pre-credits sequences, in which the unnamed woman loiters dejectedly around a soundstage, instantly establish the theatrical roots of the film, besides reflecting the gloom that has gripped the protagonist. In the first scene, she dons a bright red crinoline ball gown. In the next, she is in black. The colour of love is replaced by the colour of mourning.

Post-credits, the woman, now in a turquoise suit, is in a hardware store to buy an axe - the only time she is out of her apartment since her lover left her. But later, on the phone with her ex-lover, she lies so as not to let on how badly she has taken the desertion. She tells him she watched a play with a friend, visited the therapist, and had sumptuous meals.

Her monologue constitutes the film's spine. We neither see nor hear the man who abandoned her after a four-year affair. She is lucid, pointed and, at times, sturdily defensive, but it is obvious that she is on the brink of a meltdown. She is, at the same time, determined not to lose her grip on herself. Hence the see-sawing between palpable truth and tremulous obfuscation.

About halfway into The Human Voice, the woman sports a scarlet ribbed-knit set and puts on layers of make-up before she pops a fistful of sleeping pills in an ostensible suicide attempt. Almodovar uses stylised colours on the character's outfits, and on the walls and props in her exquisitely furnished and upholstered dwelling, to convey an uncertain state of being that the audience can relate to, given the trying times the world is in the midst of.

On an olive-green wall at the entrance of the apartment hangs a Vargas pin-up. Above her bed is a large frame of Artemisia Gentileschi's 'Venus and Cupid'. Intimations of love and passion are all around the house but they are now mere echoes. "In the future, I'm going to be a practical woman for a change," she says. Not much later, she laments, "I'm a ruin of what I once was." In her confinement and despair, the woman mirrors the uncertainties of a pandemic-ravaged world.

It is in her reading and viewing choices that Almodovar reveals himself most directly. In a frame, we spot DVDs of All That Heaven Allows and Written on the Wind, two 1950s Rock Hudson films directed by Douglas Sirk. Sirk's use of colours is known to have influenced the evolution Almodovar's vivid visual palette.

On the table are Alice Munro's Too Much Happiness (Almodovar adapted three of the Canadian writer's short stories for his 2016 film Julieta) and Lucia Berlin's short story anthology, A Manual for Cleaning Women, which the director is currently reportedly in the process of filming. Also, do not miss Truman Capote's novella Breakfast at Tiffany's and F. Scott Fitzgerald's novel Tender is the Night, both of which successfully made their way to the big screen.

Tilda Swinton joins a long line of illustrious actresses who have over the years played Cocteau's woman spurned. In Roberto Rossellini's 1948 film Una Voce Umani (part of a two-segment anthology titled L'Amore), it was Anna Magnani. In 1964, Simone Signoret, recorded the play in a single, non-stop take in her Parisian home.

A few years later, Ingrid Bergman had a go at the role in an ABC production. (In a scene in The Human Voice, an Ingrid Bergman autobiography is visible on a book shelf). In the late 1970s, Liv Ullmann appeared in a stage production of The Human Voice that was spun off into a television episode. As recently as in 2018, Rosamund Pike portrayed the woman in a 19-minute short film.

With Almodovar having given her the leeway to break free from anything done before, Swinton soars. She is as always inimitable, blending the campy with the classy, the prickly with the piquant, the abject and the assertive in a riveting exploration of the psyche of a woman left all alone to nurse a deep wound.

Embedded into the film is a veritable treasure trove of things unmistakably Almodovarian. With Swinton bringing it all alive, The Human Voice delivers a cinematic spread that transcends the abbreviated format.