The Disciple Review: The Marathi film, executive produced by Alfonso Cuaron, tracks an arduous rites-of-passage journey in a manner that is instantly illuminating. 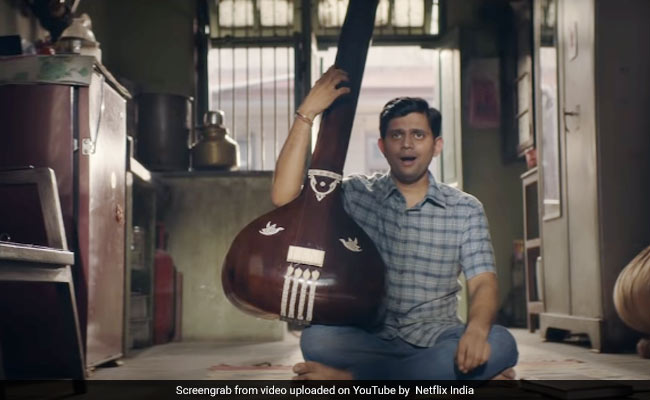 A keenly observed, delicately crafted drama about learning and unlearning in the cloistered world of Hindustani classical music, The Disciple zeroes in on a Mumbai vocalist trying to find his voice - and feet - in a demanding domain. The Marathi film, written and directed Chaitanya Tamhane and executive produced by Alfonso Cuaron, tracks an arduous rites-of-passage journey in a manner that is instantly illuminating.

The Disciple, streaming on Netflix, explores the pangs of a singer's transition from youth to maturity, and from pursuit and probing to self-realization and resignation. The film's impressive formal rigour is in perfect consonance with the purpose that drives the austere narrative and the spaces, ideas and sounds within and around which it unfolds.

Tamhane's brilliant screenplay, which provides a window on a storied subculture, centres on Sharad Nerulkar (real-life classical singer Aditya Modak), a man in his mid-20s, and his mentor Pandit Vinayak Pradhan (Arun Dravid, Kishori Amonkar's foremost disciple). The guru is a hard taskmaster and the disciple's path is strewn with daunting challenges. In the opening sequences, set in 2006, Sharad readies himself for a competition. He shops for a new outfit. On the stage everything is a performance, he says, attributing the truism to his departed father (who we will see later in flashbacks and an old television interview).

Sharad sings a Raag Bageshri bandish but earns no prize for his effort. As the names of the winners are announced, the camera, stationed diagonally to his left, is on Sharad. But his face is inscrutable. And that how it is going to be for the rest of the film. Sharad isn't given to expressing his emotions. What goes on in his mind is as much a mystery as the musical notes that he strives to master under Guruji's tutelage.

Tamhane indicates early enough that The Disciple is more interested viewing Sharad's evolution as a man and a musician from a somewhat detached vantage point - from the wings, as it were - rather than in placing itself in the midst of the vocalist's personal and professional universe.

The camera placements and angles (cinematography: Michal Sobocinscki) are orchestrated in a manner that emphasises the rarefied nature of the spaces that the classical musician necessarily occupies: the concert halls, the living rooms of private residences, the Guruji's modest one-room abode, Sharad's far more spacious home, the terrace that he often retreats to, the dimly-lit corner in which he watches pornography and the digital remastering studio where he converts analogue recordings into compact discs.

His deepest thoughts are, however, activated when he rides his bike through the deserted, late night streets of Mumbai, imbibing the recorded wisdom of Maai - Vidushi Sindhubai Jadhav (voiced by the late filmmaker Sumitra Bhave, by way of an invocation of a hallowed ambience that seems far removed from the air of mundane domesticity around Sharad). Does Sharad have it in him to sing only "for God and my Guruji", as Maai did during her time?

Sharad venerates Guruji who, like Maai, has stayed away from the concert circuit and participates in an occasional private soiree. But Guruji himself is anything but in awe of his ward's singing, rebuking him publicly on several occasions.

Sharad's future rests on whether he can absorb the master's guidance as diligently as he serves him. He massages the ailing guru's back and legs, cooks for him, accompanies him to the doctor's, and even helps him with his ablutions. The young man, who lives with his grandmother (Neela Khedkar) and works for a small firm that produces classical music CDs, is almost always at the old man's beck and call.

The examination of the guru-shishya relationship is situated in the larger context of the myths that swirl around Guruji and Maai. The latter, as legend goes, was reclusive to the point of never performing in public and forbidding any recordings of her songs. All we, therefore, hear is her speaking voice.

Flashbacks also reveal Sharad's interactions as a boy with his father (Kiran Yadnyopavit, himself a filmmaker), who gave up his own pursuit of classical music and settled for the less exacting job of writing on and talking about its exponents.

Maai's pronouncements harp on the lofty notions of surrender, sacrifice, penance, discipline and unflinching courage. His late father Mukund, since whose untimely death Sharad's mother has lived away from him, stands for abandoned ambition. Guruji is the only tangible influence that Sharad can bank upon. He clings to him with all his might despite the many hurdles he encounters in his attempts to please him.

The absence of a physical 'mother' figure in Sharad's life is noteworthy. His biological mother, a woman we see and hear only fleetingly in a flashback advising her husband to let the boy go out and play with his friends instead of tying him down to a music training session. Maai is a presence only in old VHS recordings that he is in the process of converting into CDs. His granny exhorts him to look for a 'proper', well-paying job and settling down. Sharad's awkwardness around women is exemplified in one scene with fellow disciple Sneha (classical vocalist Deepika Bhide Bhagwat). Sharad touches her hand. She gets up and takes his leave. He sends her an SMS message to say sorry. Cut to a shot of Sharad watching porn and pleasuring himself - another of the transitions he needs to absolutely make, but struggles with.

The recordings that Sharad converts from one format to another is a metaphoric allusion to the changes sweeping over contemporary classical music scene and pushing it into the modern era with its contradictions and pressures. He has to choose between his increasing loneliness - apart from being a physical reality, it is reflected in his watching (without revealing his inner feelings) a performer without any family history of music achieving fame and popularity on a reality show, - and his hunger for success as a pure classical musician.

A restless mind cannot sing khayal with depth and authenticity, Maai says. If you want money and plan to raise a family, classical music isn't for you, she says. You should then opt for light classical or film music, her voice asserts. Guruji asks Sharad: Why are you so restless? Where do you want to reach in such a hurry? It is a tussle within, deeply perplexing but of crucial significance, especially in the context of the choices that Sharad must make as he reaches his mid-30s and gets set for the rest of his life.

In terms of tone and texture, The Disciple isn't all that different from Tamhane's Court although the two films are set in milieus that have nothing in common. A Dalit protest song was a key plot element in Court - it leads to the poet being put on trial for instigating the suicide of a sanitation worker. The Disciple has an entire musical ecosystem as a backdrop and a fount of the soundtrack. Aneesh Pradhan's music design - which ranges from Arun Dravid singing Raag Jaunpuri to a closing folk number (Gorakhnath's Kuveru Keenare Avadhoo) sung by a blind minstrel on a city train - and the sound design by Anita Kushwaha and Naren Chandavarkar combine to create a distinctive, hypnotic auditory tapestry.

Like the lawyer in Court (the character was played by Vivek Gomber, who is the producer of this film), the protagonist of The Disciple has a tough battle on his hands. While the former had to fight his way through a skewed legal system, Sharad is at war with himself and the musical legacy he hopes to perpetuate.

The personal and the professional intermingle not only to shape the individual that Sharad will eventually become but also to determine the essential contours of the film itself. Both, the telling of the story and the crafting of the film, command absolute attention - and admiration.