"Stop Posting Home Workouts": We're With Diljit Dosanjh On This One

"Don't show your workout to others and don't go close to anyone," wrote Diljit Dosanjh 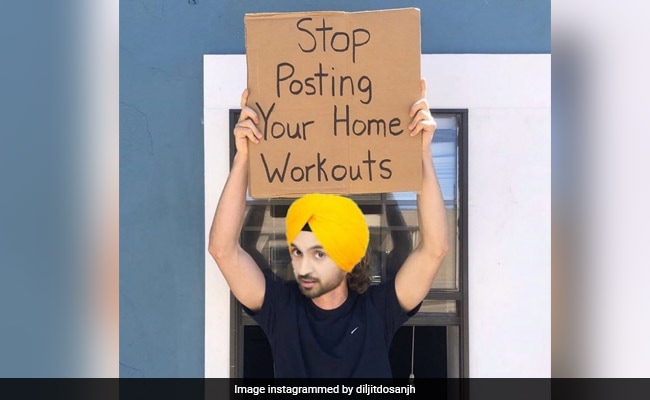 Diljit Dosanjh is tired of seeing videos of people working out at home while in Coronavirus lockdown, thank you very much. Instead, he would like you to eat, drink and make merry, mitro. Confined indoors for 21 days, many have been sharing glimpses of their fitness routines in the absence of gym access - celebrities in particular (we are looking at you, Katrina Kaif) have been enthusiastic about this and clearly, Diljit Dosanjh thinks they are making him look bad. We can't disagree. On Tuesday, the 36-year-old singer-actor tweeted a picture of a man holding a placard reading "Stop posting your home workouts."

Twitter spotted a gap and filled it, photoshopping Diljit's face into the original image. On Wednesday, he shared the edited image, with advice on what everyone should do instead of posting workout videos. "Khao peeo aish karo mitro (Eat, drink and have fun, friends)," Diljit wrote, adding in Punjabi " Workout kisey nu dikhaeyo na, te nede kisey de jaeo na," which news agency IANS translates as, "Don't show your workout to others and don't go close to anyone." Here's Diljit Dosanjh's revised meme:

Of course, Katrina Kaif isn't alone in diligently keeping up with her exercise regime and then telling us about; other stars like Sara Ali Khan and Anil Kapoor are also not allowing themselves to slack off just because they are homebound.

Let's keep moving ( indoors )! There's no escaping my workout when my trainer @marcyogimead is staying with me! #QuarantineandWorkout #StayHomeStayFit

If you do plan to take Diljit Dosanjh's food and drink advice but are lacking kitchen skills, this counts as a recipe (per him):

Diljit Dosanjh's meme game is strong. A few weeks ago, he made the Instagram crack up by photoshopping himself into a picture of Ivanka Trump at the Taj Mahal. Sharing the picture, Diljit wrote an ROFL caption: "Me and Ivanka.

Diljit Dosanjh became a household name with a hit list of songs like Proper Patola, Do You Know and Patiala Peg among others. He has also featured in several Punjabi films.