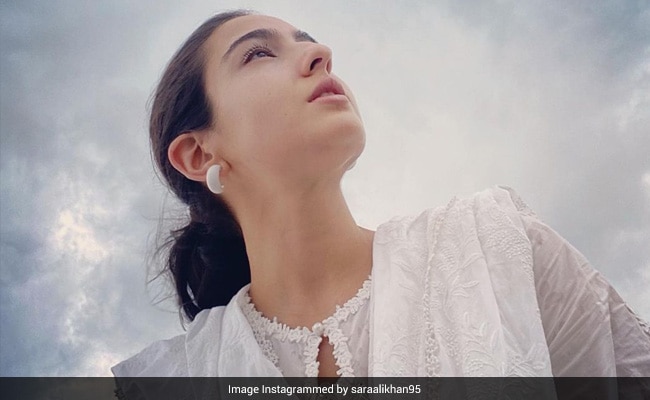 Amid our busy schedules, it is important that we take some time to stop, breathe and think of how far we have come. Actress Sara Ali Khan seems to be practising this and her new social media posts are proof. As per her latest Instagram post, the actress is all about staying true to her roots and culture. In a lovely picture shared by the actress, she is dressed in an elegant white salwar suit. In the image, she is looking into the distance, with an overcast sky in the background. The stunning photo is accompanied by a lovely caption that reads, "Azad rahiye vicharo se, lekin bandhe rahiye apne sanskaro se (Stay free of judgements, but remain tied to your culture)."

The actress has added the same photo on her Instagram Stories along with the old Hindi song Neele Gagan Ke Tale playing in the background. She has also added stickers that say "good vibes”, "good day” and “remember the blue sky." 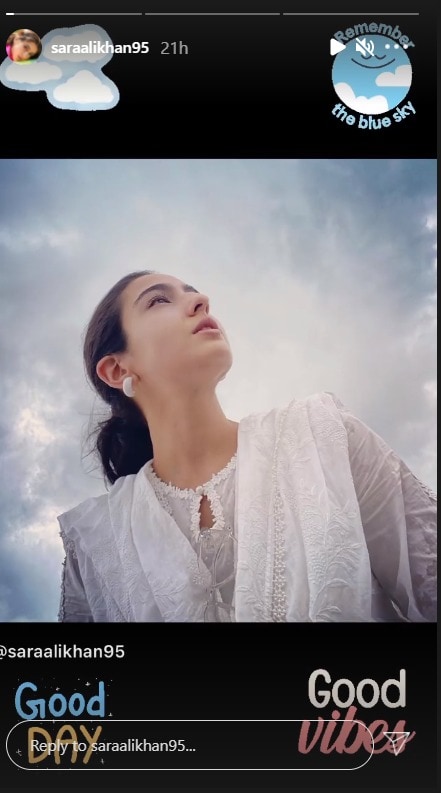 The Kedarnath actress, who is quite vocal about her spiritual bent of mind, had visited the Kamakhya Temple in Assam only four days ago. In the photos she shared on Instagram from the shrine, she is seen in a white salwar suit, a traditional Assamese gamosa and a red tika on her forehead. The caption mentions the hashtags "peace", "gratitude" and "blessed" along with some emojis.

In addition to her spiritual sojourns, Sara is also keeping herself busy with her workout routines. The actress, who is extremely dedicated to her fitness regime, often also shares glimpses of her gruelling exercises. In one such post, her caption reads, "Wake up. Jump up. Push up. Head up. Burn up. Level up."

And even when she is performing some tough exercises, her wit and charm remain intact. Thanks to her quirky poems, which she calls “Sara ki shayari,” her Instagram captions are all things fun. For instance, we love the cheeky poem she added to a series of photos in which is she posing in white athleisure clothes. "White white, hold your core tight. Oh yes, and braid up for some height. Always smile bright but have your game face on for a fight," reads her caption.

On the International Day of Yoga this year, she posted a picture of herself striking the perfect balance in the tree pose. The photo came with the caption: "Yoga is the journey of the self, through the self, to the self. Happy International Yoga Day,"

Sara Ali Khan was last seen in the 2020 film Coolie No 1 alongside actor Varun Dhawan. She is the daughter of actors Saif Ali Khan and Amrita Singh.