"These aren't the clothes we are wearing in the film," wrote Varun Dhawan 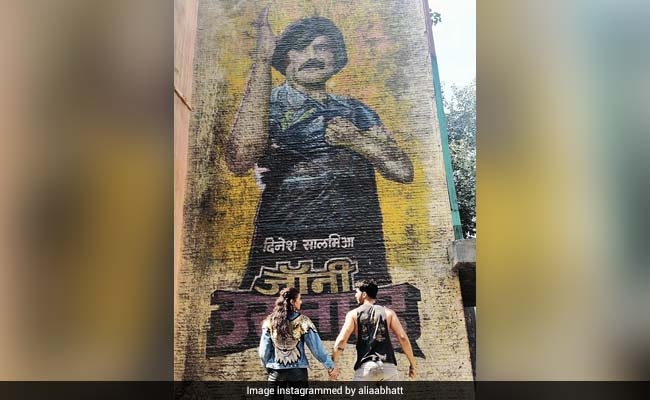 Kalank co-stars Alia Bhatt and Varun Dhawan frequently make appearances on each other's Instagram profile and we simply love it when that happens. The reason we brought this up today is because the duo shared identical posts on their respective Instagram posts on Wednesday. The duo can be seen holding hands as they stand in front of a graffiti wall with a giant painting of Rajinikanth. Alia aroused a sense of curiosity in her Instafam and wrote: "Coming soon." She added the hashtag "#Kalank", cryptically hinting at her forthcoming film Kalank. However, she also clarified that the picture is not a still from the film. "This isn't a look from our film BTW, wrote Alia.

@varundvn #kalank (P.S-This isn't a look from our film btw )

In the picture, film's lead actress Alia Bhatt can be seen dressed in a quirky denim jacket with an eagle print on the back and pair of black jeans, while Varun Dhawan can be seen wearing a black t-shirt and a pair of grey pants. Varun Dhawan also shared the picture on his Instagram profile and wrote: "These aren't the clothes we are wearing in the film."

After the film's lead pair wrapped shooting for Kalank, they shared extensive notes on each other's Instagram profiles. "Our fourth film completed together and he still manages to surprise me with his hard work and crazy energy every day," read an excerpt from Alia Bhatt's post.

& it's a film wrap for Varun on KALANK.. Our 4th film completed together and he still manages to surprise me with his hard work and crazy energy everyday.. Also manages to make me laugh like a crazy person by just being himself.. I can't can't can't wait for you guys to see the stuff he's done with his character in the film!!!! #KALANK

Kalank is Alia and Varun's fourth film together. The duo made their Bollywood debuts together with Student Of The Year in 2012 and they later co-starred in Dharma Productions' Humpty Sharma Ki Dulhania and Badrinath Ki Dulhania.

Directed by Ahishek Varman, Kalank also features Madhuri Dixit, Aditya Roy Kapur, Sanjay Dutt and Sonakshi Sinha. Madhuri Dixit will feature in the role that late actress Sridevi was originally cast in. The film is expected to release in April this year.