Actress Priyamani got married to her long-time boyfriend, businessman Mustafa Raj at the registrar office in Bengaluru today 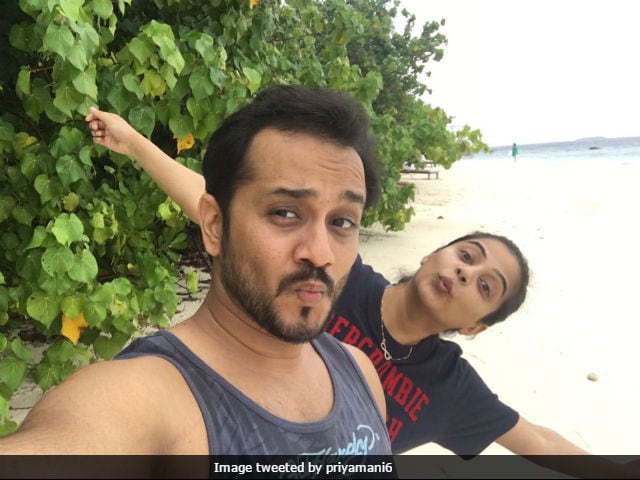 New Delhi: South actress Priyamani got married to her long-time boyfriend, businessman Mustafa Raj in Bengaluru today. The couple reportedly got married in a simple function at the registrar office and they will be hosting a grand reception on August 23. Ahead of the wedding, a lavish sangeet ceremony was held at a five-star hotel in Bengaluru on Tuesday. A few pictures from the ceremony were shared by Priyamani's friend, actress Parul Yadav on Twitter. In one of the photographs, Parul is seen happily posing with the couple. "Had a blast last night at @priyamani6 @mustufaraj Sangeet party...!!," she tweeted. See the pictures shared by Parul Yadav here:

Had a blast last night at @priyamani6@mustufaraj Sangeet party...!! pic.twitter.com/C0jdYfNRhO

Priyamani got engaged to Mustafa on May 27 last year in a private ceremony which was held at her Bengaluru residence. She shared the news with her fans and followers on Twitter along with a beautiful photograph.

Happy to announce that Mustufa Raj and I got engaged on Friday the 27th at a close and private function at home! pic.twitter.com/0QX51YLdUQ

Priyamani also talked about her husband Mustafa and said that he has always been 'extremely supportive and encouraging.'

Priyamani will be seen wearing an outfit designed by Poornima Indrajith at her wedding reception.

Priyamani has featured in several Kannada, Malayalam, Tamil, Telugu and Hindi films. She made her acting debut in 2002 with Telugu film Evare Atagaadu.

Promoted
Listen to the latest songs, only on JioSaavn.com
Priyamani gained recognition for her performance in Tamil film Paruthiveeran. The movie won her the National Film Award for Best Actress.

Priyamani made her Bollywood film debut in 2010 with Mani Ratnam's Raavan, starring Abhishek Bachchan and Aishwarya Rai Bachchan. She later portrayed a small role in Rakta Charitra II and featured in the song 1 2 3 4 Get On The Dance Floor from Shah Rukh Khan and Deepika Padukone's Chennai Express. Priyamani was last seen in Tamil film Chowka.