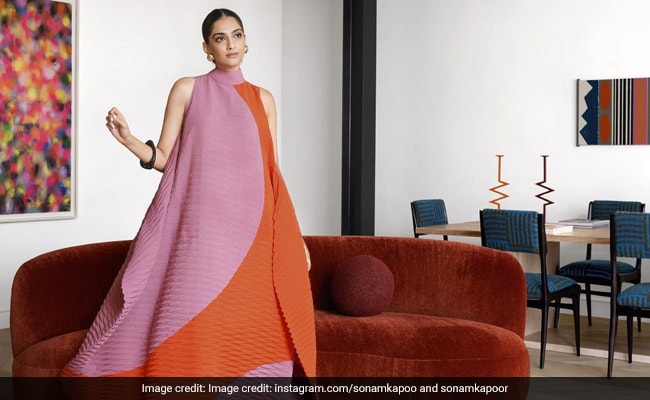 Sonam Kapoor once again tickled our aesthetic tastes today. After giving us a sneak peek inside the chic interiors of her London apartment, Sonam opened the doors to her husband, entrepreneur Anand Ahuja's office. The workspace is being featured in Architectural Digest magazine's September-October issue. Sonam wrote, “Anand and I had been looking for a permanent office space for him in London for some time. From the moment we turned the corner into the subtle yet colourful mews and entered this 3-floor unit, we knew we found that and more.” The decor is pristine with a nascent mix of muted tones and pops of colours, thanks to creative director Nikhil Mansata. Sonam also thanked Nikhil, her closest friends, and wrote, "We've both grown up in India — being both proud and grateful for our complex and beautiful heritage. We spent the last year converting the mews into a peaceful yet inspiring sanctuary that reflects our love for South Asian heritage, craftsmanship and art."

The interiors strike a balance between earthy Bohemian motifs and edgy angular furniture. The natural light spilling in through the windows is a plus point. Sonam, Kapoor, posing in their amidst, looks stunning in her fashionable attires. Sonam also thanked Amrita Jhaveri for the beautiful art collection. “A very special thank you to Amrita Jhaveri for helping me curate art and build my collection. The soul of the studio is because of you. And Chandni Modhafor always being the best,” it read.

Sonam Kapoor's father, actor Anil Kapoor called the office space “phenomenal”. He added, "I will definitely show off and keep my meetings in London in this office ...Claiming it's mine.” Sonam sister, producer Rhea Kapoor dropped a red heart in the comments section.

Here's a glimpse inside the beautiful office space:

Anand Ahuja couldn't help but praise the hard work and creative thought that went behind this awe-inspiring office decor. He applauded "the relentless approach to work and absolute respect for craft" by Sonam Kapoor and Nikhil Mansata. He wrote, "I could say something about the inspirations that went into the office… you all know I didn't have much to do with making it."

If there is a place in London that Sonam Kapoor calls home, it's the couple's Notting Hill flat. The decor by interior designer Rooshad Shroff in the two-and-a-half bedroom flat is elaborate yet serene. The apartment abounds in bright colours and dreamy wall art. A touch of green and Indian motifs make it the perfect abode for Sonam and Anand Ahuja in London.

Sonam Kapoor and Anand Ahuja travel back and forth between London and India. The two got married in May 2018. On the work front, Sonam was last seen in the film AK vs AK alongside her father Anil Kapoor and filmmaker Anurag Kashyap.