After Sonu Nigam dismissed Sona Mohapatra's scathing criticism of his controversial remarks as 'vomiting on Twitter,' she wrote an open letter 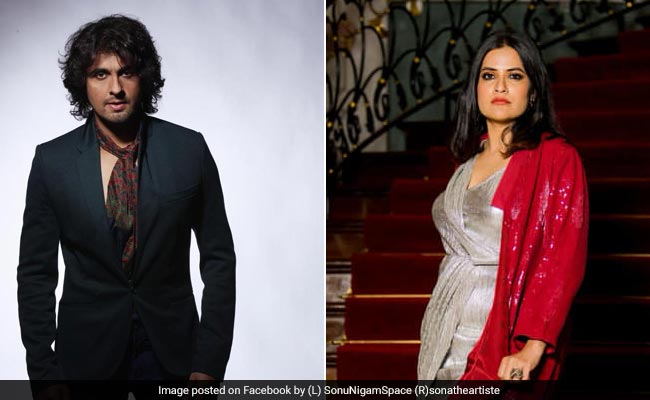 Singers Sona Mohapatra and Sonu Nigam are currently locked in a furious exchange of recriminations that began over Mr Nigam's 'better off in Pakistan' comment. After he dismissed Ms Mohapatra's scathing criticism of his controversial remarks as 'vomiting on Twitter,' Sona Mohapatra, already incensed by his previous defence of #MeToo accused Anu Malik, has written Sonu Nigam a two-part open letter on Facebook. In the first part, posted earlier in the day, she calls him out for his Pakistan comment, his description of her opinions as 'vomiting' and for reducing her identity to someone's wife (Ms Mohapatra is married to compose Ram Sampath). She also slams him for defending "a known serial sexual offender like Anu Malik, thereby discrediting all the women who have called him out; disturbing, horrifying and heartbreaking."

Sona Mohapatra's post is a response to Sonu Nigam's statement, reported by news agency PTI, saying: "The respectable lady vomiting on Twitter, is the wife of someone who I consider very close to me. So, although she has forgotten the relationship, I'd like to maintain the decorum."

"To define me basis a relationship with another person and not as an individual, going to the extension of memory loss for my name; a gift of patriarchal conditioning," Ms Mohapatra shot back, adding, "I refuse to call you someone's papa or someone's husband or someone's son." Read her post here.

Earlier this week, Sonu Nigam raised eyebrows by saying at Agenda Aaj Tak that Indian musicians are required to pay concert promoters a percentage of their earnings but foreign artistes are not, ergo he might have been 'better off' had he been a Pakistani singer. As this snowballed, Mr Nigam issued a clarification on Facebook - he exited Twitter in 2017 - accusing the media of sensationalising his comment for the sake of a 'catchy headline.'

Sona Mohapatra was among those outraged by Mr Nigam's comment and responded to his views in a lengthy statement in the second-part of her open letter on Facebook, an excerpt from which reads: "Regarding Pakistani artists not having to 'pay up', I have this to say - even established star artists in India like Arijeet Singh, Shreya Ghoshal and others aren't having to pay music labels to the best of my knowledge." Read her post here:

Earlier, she had tweeted: "I always found Sonu Nigam to be brighter than most of his peers... Feeling so let down hearing him talk like this and choose the dark side to side up with... Are Arijit Singh, Badshah, Vishal Dadlani from Pakistan though? (You've had your moment in the sun dear. India anoints a new 'Male Super Star' every 3/4/5 years without fail. Don't blame the Pakistani artists. Also do not mix up art and music with politics and ideology."

I always found Sonu Nigam to be brighter than most of his peers, intelligent, so talented, excellent at his craft & yes, kind too. Feel so let down hearing him talk like this & choose the dark side to side up with. I'm hoping he realises how sad this is. https://t.co/aQxiD2VdUx

At the Aaj Tak event, Sonu Nigam also questioned the multiple accusations of harassment against Anu Malik, asking for proof. In a tweet, Sona Mohapatra asked if Mr Nigam expected women to 'a)strap recording devices b)carry spy cams' to be able to provide him with the proof he seeks.

Anu Malik, one of the several men to have been accused in the #MeToo movement that spiralled through the film and music industry this year, has denied he harassed anyone and his lawyer told news agency PTI that the allegations were an attempt to tarnish the composer's image.

Sonu Nigam, who is a National Award-winning singer, has credits for over a hundred songs in eight languages including Hindi, Kannada, Tamil and Marathi.