Shyam Benegal Says, 'CBFC Should Not be Using Scissors on Any Film' 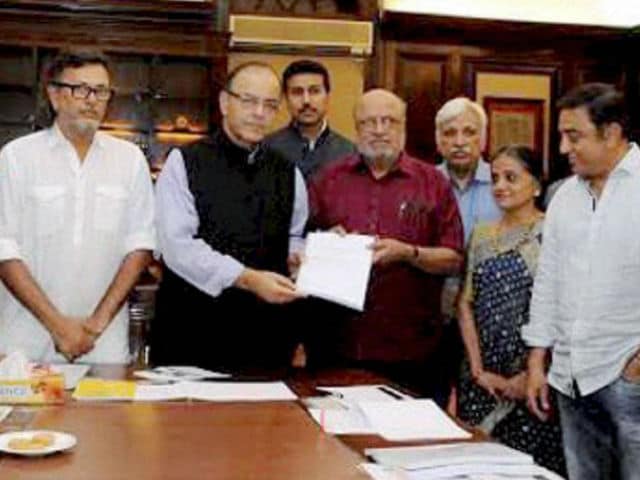 New Delhi: A government-constituted panel headed by filmmaker Shyam Benegal has recommended that the censor board should categorise rather than "use scissors" to cut films while suggesting new categories classifying movies.

"We are recommending that CBFC should not be using scissors on any film. We are suggesting that in addition to different classifications that we have - we should have two categories of U/A, one plus 12 years of age and one plus 15 years of age and two categories of adult, one is normal adult and another adult with caution," Mr Benegal told reporters.

The committee constituted by the Information and Broadcasting Ministry on January 1 to take a relook at the functioning of the controversy-ridden board, submitted its report to I&B minister Arun Jaitley today.

The committee, however, suggested that the Central Board of Film Certification can refuse certification if a film contains anything that contravenes the provisions of Section 5B (1) of the Cinematograph Act, 1952. As per this section, a film shall not be certified if the competent authority feels that it or a part of it is against the interests of the sovereignty and integrity of India, the security of the State, friendly relations with foreign States, public order, decency or morality, or involves defamation or contempt of court or is likely to incite the commission of any offence.

Another case when the panel has recommended that the CBFC can refuse certification is when the "content in a film crosses the ceiling laid down in the highest category of certification."

As per the recommendations, the filmmaker must specify the category of certification being sought and the target audience.

The committee has said the Censor Board chairman should only play the role of a guiding mechanism for the CBFC and not be involved in the day-to-day affairs of certification of films.

The functions of the board shall be confined to the duties defined in the existing CBFC rules, which include an annual review of CBFC work, submission of annual report to the government, review of public reactions to films, and periodic recommendations for revision of guidelines.

The Censor Board, especially during the term of its present chairman Pahlaj Nihalani, has been hit by several controversies. Days before the panel was set up, Mr Jaitley had said he would want the CBFC to be "controversy free."

While the Shyam Benegal-led panel has given its recommendations on various aspects, it has sought some more time to give recommendations on issues relating to clearances to be obtained from the Animal Welfare Board under the Prevention of Cruelty to Animals Act and aspects related to depiction of smoking in films.

The Committee shall give their recommendations on these issues by June 20.

The panel has also suggested online submission of applications as well as simplification of forms and accompanying documentation. Recertification of a film for purposes of telecast on television or for any other purpose should be permitted, it has held.

Regarding the Regional Advisory Panel, the committee has laid down the criteria for appointments as per which women should have 50 per cent representation on each panel.

All 9 regions, the committee said, will have advisory panels comprising people who are acquainted with the languages being certified by that regional office.

Members recommended by the National Council for Protection of Child Rights (NCPCR) and National Commission of Women (NCW) should constitute another 25 per cent, the panel recommended.

Representatives of the local film industry, as recommended by Film Federation of India should form the remaining 25 per cent on these panels.

In order to preserve Indian cinema, the committee recommended every applicant be asked to deposit the Director's Cut in the NFAI for preservation of Indian cinema, instead of the certified version, in order to truly reflect the cinematic history of films.

In the event complaints are received by the central government, the same shall be referred to the CBFC. The chairperson may, if he considers it necessary to do so, refer the film to a revising committee for examination once again, on account of alleged violation of Section 5B(1) of the Cinematograph Act, 1952.

According to a statement released by the I&B ministry, the objectives of the guidelines is that children and adults are protected from potentially harmful or unsuitable content while audiences, particularly parents, are empowered to make informed viewing decisions.

It is also aimed that artistic expression and creative freedom are not unduly curbed in the process of classification of films while keeping the certification process responsive to social change.

As per the report, the certification of films shall be carried out in accordance with the guidelines proposed for certification that have been split into three sections, with each section required to be read with the other two - general guidelines, issue related guidelines and category specific guidelines.