Shilpa Shetty Is On A Holiday With Sister Shamita, Minus Husband Raj Kundra 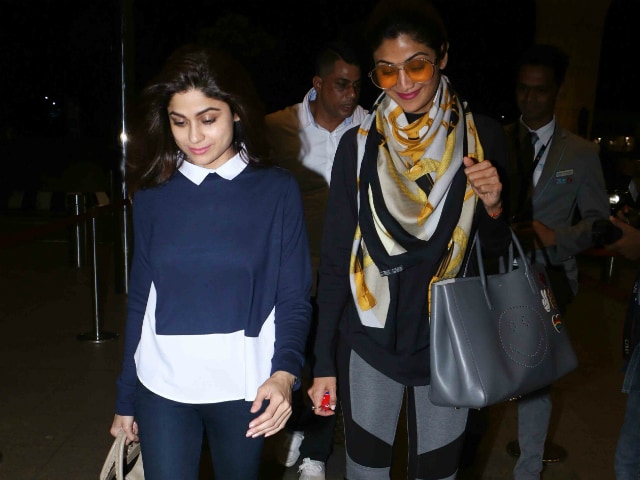 Shilpa and Shamita Shetty photographed at the Mumbai airport

New Delhi: Shilpa Shetty Kundra is out on a holiday, but this time without her husband Raj Kundra and son Viaan Raj Kundra. The Dhadkan actress is being accompanied by her sister Shamita Shetty and both are going to be 'water bound' for the next two days, as they are off from Marseilles, a port city in France, to attend a friend's wedding. The Shetty sisters posted pictures on their Instagram accounts on April 6. Shilpa Shetty captioned the image: "Water bound for 2 days. Cruising off from Marseilles. Attending our friends' wedding celebrations done unusually. #rizwan. Sajan booked out the whole 4 days on this Cruise (sic)."

The 41-year-old actress had earlier posted a picture of them seated in a luxurious business class flight and captioned it as: "Travelling overseas with @shamitashetty_official , yaaay ! High flying Shetty sistas in the house (sic)" - High flying sisters indeed.

It is doubtful that Shilpa and Shamita will cheat on their diet plans at the overseas wedding that they are attending but we couldn't miss Shilpa's latest videos on her Sunday dessert indulgences that she posts on the photo sharing website. Take a look:


Meanwhile, her husband Raj Kundra posted a picture of the couple indulging in some healthy probiotic shots at a party they were attending. Watch it here:


Promoted
Listen to the latest songs, only on JioSaavn.com
The Shetty-Kundras sure know how to keep it fit and healthy, even during letting their hair down. Some tips for us please.

Shilpa Shetty was last seen in 2007 film Apne and starred in a cameo in Om Shanti Om the same year. She produced 2014 Dishkiyaoon, in which she had a special song sequence.