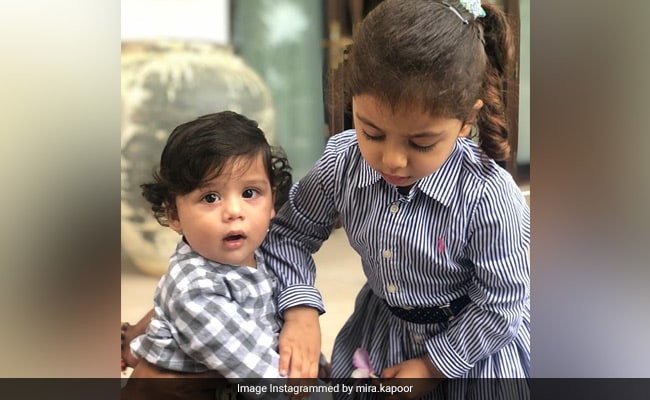 On Instagram, Mira Rajput shared a glimpse of what mischief her children Misha and Zain were up to recently. Mira shared a three-picture post on Instagram describing Misha and Zain's totally adorable and hilarious interaction. In the caption, she described each image with a conversational peg: "Z: 'Oh cool can I play with that flower' 2. M: 'Ya let me help you hold it' 3. M: 'MOM HE JUST PINCHED ME'." The 'Z' and 'M' in the caption for Zain and Misha, respectively. Clearly, Misha has a flair for drama. Mira's Instafam defined the post as "sibling goals." Misha is the elder of Shahid Kapoor and Mira Rajput's two children. She is elder to Zain by two years.

Shahid Kapoor married Mira Rajput in 2015 and they welcomed Misha in 2016. In September 2018, their son Zain was born. Misha and Zain frequently feature on both their parents' social media profiles. The family of four recently took a vacation in Singapore, where Shahid also unveiled his wax statue at Madame Tussauds.

Earlier, Shahid Kapoor told news agency PTI that being a father changed him as a person. "Fatherhood has brought a lot of change in me as a person and as a human being... I am less self-oriented now, because I believe actors can never be not self-oriented... I have matured and feel a lot more grown up now," he said.

On the work front, Shahid Kapoor is awaiting the release of Kabir Singh come July. Kabir Singh, directed by Sandeep Reddy Vanga, is a remake of Telugu film Arjun Reddy. It is the story of a brilliant surgeon dealing with alcoholism and anger management issues. The film also stars Kiara Advani.