"The magic, the madness, the music that was my love letter to Bollywood," wrote Farah Khan 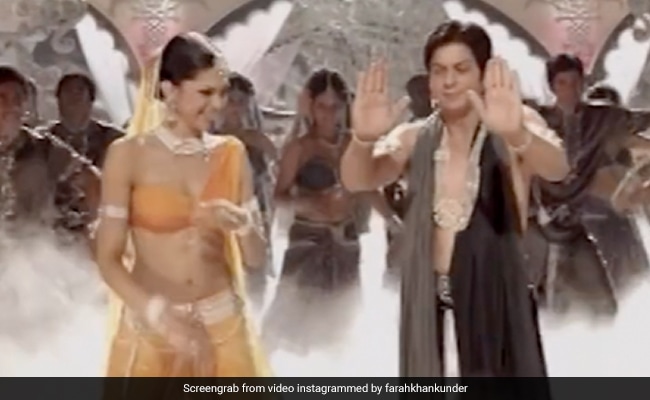 Deepika and SRK in a still from the video. (courtesy: farahkhankunder)

As Shah Rukh Khan and Deepika Padukone's blockbuster Om Shanti Om clocked 15 years on Wednesday, the film's director Farah Khan shared a bloopers video from the film and it is a sheer delight. The video begins with Dhoom Taana bloopers, with SRK and Deepika Padukone getting a few steps wrong. The final results were phenomenal nonetheless. There are a few blooper clips of SRK with Kirron Kher and Shreyas Talpade (who played SRK's mom and friend in the friend, respectively). Also, the "poori kayanaat" monologue that did make it to the final cut was so iconic after a few lisps here and there. Deepika Padukone's Sandy and Kirron Kher clearly had a tough time keeping a straight face while shooting the "Ek chutki sindoor" scene. PS_ The BTS of Arjun Rampal and Deepika Padukone's oh-so-serious pre-interval scene was anything but serious.

If one thing was constant throughout the course of the video, it has to be SRK's impeccable comic timing. Be it telling Kirron Kher to "hurry up or else Farah (Khan) will get angry" between a serious scene or his adorably honest reactions while shooting the Dard-E-Disco song. The bonus, however, has to be the Deewangi Deewangi clip, what with Salman Khan cracking up, Saif Ali Khan photobombing and way more. You'll know when you see it.

Farah Khan captioned the post: "The magic, the madness, the music that was my love letter to Bollywood." She added the hashtags #15yearsofomshantiom and #blooperreel.

This is the video posted by Farah Khan:

Deepika Padukone debuted in Bollywood opposite Shah Rukh Khan in Om Shanti Om and then they co-starred in Happy New Year and Chennai Express - all three movies did well at the box office. The duo will next be seen in the action thriller Pathaan, also starring John Abraham.